Polygod Brings FPS and Rogelites Together in New Ways on Linux 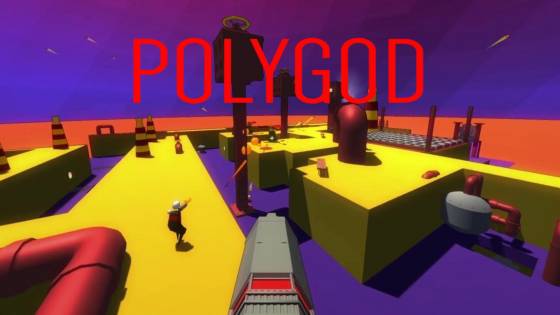 First-person shooters have been one of the biggest genres on computing devices for over 20 years, while rogue-like games have blown up in the last decade. Very few games have tried to combine them, but Polygod sets out to do just that - and do it with a unique visual flair. Roguelikes are tough games to enjoy for some - as you don't have the traditional feeling of progress. Given that each death nixes your theoretical progress, it's easy to be discouraged. However, Polygod keeps things randomly-generated, which helps keep things much fresher.

Polygod gives you a wide variety of weapons to choose from. Beyond things like pistols and shotguns, you also get a multi-shot. This acts much like a spread shot in a side-scrolling shooting game and allows you to cover far more area in the same period of time. The developers sought to make an incredibly difficult game but did so while also making a much faster-paced FPS game than many on the market. You can jump all around the stages, offering up a mix of skills that will require a touch of platforming prowess to go along with superior marksmanship.

Beyond using randomized stages, the devs wanted to create a game that could be mastered in time - but easily played right away. The shooting has a delay and has a learning curve to it as well. However, this can work in the player's favor because once you learn the timing in the single player game, you can take that mastery and turn it into massive success in an online multiplayer match. Players can craft their guns as the game wears on and you can also choose different paths to take in the game. If you want a regular challenge, you can go through a purple door and battle a regular boss. However, those craving an even bigger challenge can go through a red door and face a harder version of the boss. This will put the player at greater risk, but also allow them to reap greater rewards.

Polygod's running and jumping have been designed to feel a bit old-hat, which is by design as they want to reward tougher movements. The old-school styling also fits in nicely with the cel-shading style on the game itself that gives it an older cartoon appearance in some ways. The game's worlds have a lot of verticalities and challenge you to use the height in them to evade enemies and their attacks. While it's a challenging game, it has been designed to give you a fair challenge. Every obstacle you're given can be overcome – you just need to be careful with how you play and avoid rushing in. It's easy to fall into that kind of trap with a faster-paced FPS, and pacing yourself will give you a better chance of success. Those seeking a thoroughly-challenging FPS may get a lot out of the game. Polygod has been in early access for quite some time and is now finally available for Linux, PC, and all major consoles.