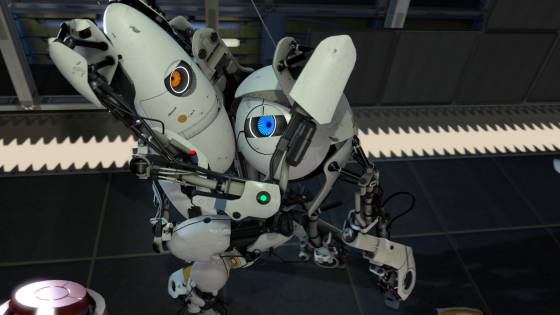 Being a Valve fan is... weird. Those out there who are also into Valve and their games probably know what I mean by that. Growing up as a fan of their games, particularly their single player outings like Portal and Half-Life, made their eventual changing business strategies difficult to cope with. It's been pretty open knowledge at this point that Valve, as a game company, have shifted their priorities to ongoing games like Dota 2 and their recently released TCG 'Artifact', alongside running the humongous PC market of Steam. Their last single player-focused title released many years ago, and a lot of key writers who were formerly staffed amongst their ranks have since left entirely. One such writer was Erik Wolpaw, a man credited with helping write the Portal games, Half-Life 2, and Left 4 Dead. Wolpaw departed from Valve in early 2017, soon to be followed by writers like Marc Laidlaw and Chet Faliszek. However, Wolpaw is now back! Kind of.

This all started when an eagle-eyed Reddit user spotted Wolpaw's name listed in Artifact's end credits. The user then went on to email Valve co-founder and president Gabe Newell, asking him if Wolpaw really was back and working at the company in the hopes of a response. Surprisingly enough, Newell responded with a simple: "He's back." The Reddit user was quick to post the reply, which had to be verified by others before it was discovered to be legit; Erik Wolpaw is indeed back at Valve. Since the story broke, Wolpaw himself has reached out to various news websites to provide further clarification. In a statement to Polygon, Wolpaw revealed that rather than working at Valve as a full-time employee like before, he's instead working as a part-time contractor. "I've been helping Pinkerton and Jaros and Vanaman whenever they need it," Wolpaw explained. "It's been busier on that front lately, but I'm not currently a full time employee. My main gig is still delivering juice for my niece Jodi's vegan juice shop plus an unpaid internship playing Slay the Spire three hours a day."

Before joining Valve, Wolpaw was originally a writer at Double Fine Productions, best known as the co-writer of their 2005 action/adventure hit Psychonauts, alongside creator Tim Schafer. That same year, Wolpaw transferred studios and went on to work at Valve, contributing his skills to both Portal games and Half-Life 2's two sequel episodes. His history with Double Fine led him back to assisting them in writing the upcoming Psychonauts 2 around the time he left Valve in 2017. As was to be expected, the news of his re-joining Valve has plenty of Half-Life fans hit with mixed feelings. For most people, the dream of seeing a Half-Life 2: Episode 3 has long died out. Episode 2 released in 2007 with The Orange Box, and has gone to this day without a proper continuation off of its brutal cliffhanger ending. Seeing Wolpaw help Valve out has led many not wanting to get their hopes up, though considering it's just contractual, it's probably nothing major where Half-Life is concerned.

Valve has been making a push to put out more games from within their studio as of late, with 2018's Artifact being the prime example. Last year, they also purchased Firewatch developer Campo Santo. Their team was already busy at work on their next big game: In the Valley of Gods. With Valve acting as the parent corporation now, they've been lending employees and finances to help Campo Santo beef up the game even more. Wolpaw was one such employee who has been helping, assisting Campo Santo's very own Sean Vanaman with writing. In the Valley of Gods is currently slated for release in 2019, and has only been confirmed for PC/Mac/Linux platforms for now. Many will be happy to hear of Wolpaw's assisting roles, even if they're not full-time like before. The man's quality of work speaks for itself in most of Valve's past outings. With Campo Santo under their wing, it's going to be curious seeing where Valve goes from here.