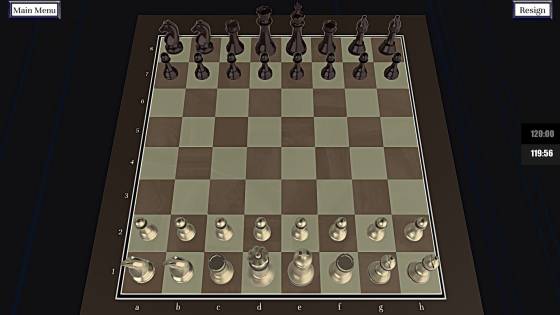 Chess is an age-old game and one that hasn't received much in the way of exposure in gaming. While many shareware games were thrown in as filler in '90s compilations, the core game hasn't been given many serious gaming options - and even fewer have tried to do anything different with the core game itself. The biggest change to Super X Chess is that it allows you to combine pieces, and it's easy to do. All you have to do is move your piece to the same square as another one to create a single more powerful piece. This newly-minted piece has the ability to move the same as both of the pieces that comprise it. There are some caveats to this though that ensure you will think about what you merge.

After merging two of your pieces, you can't un-merge them or merge those same pieces again - so you're locked into your design. This means that you absolutely need to think about the longer-term ramifications instead of any short-term gain. Royal pieces like the queen and king cannot be merged, and pawns promote only if they aren't merged or if the pawn is merged with another pawn. Other rule changes involve pawn and pawn combo pieces to move to more powerful pieces, but without a merger, pawns can only be used to jump up to rook, bishop, or knight level. Combining pieces has the benefit of boosting your strength, but takes more time. If you wind up only making more powerful pieces, then it can lead to a rookie mistake and result in you not being able to make enough moves against a swift opponent.

Other than changes like this, the normal rules of chess will apply - so veterans of the game will be able to jump right in. There are a variety of modes available, including regular chess and Super X Chess - with the new rules applied. You can create handicaps for a new challenge or to make things easier on yourself. Those who have always wanted to get into chess, or who just struggle with it, may want to stick with the tutorial. It will guide you through not only how to play regular chess, but also the Super X Chess variant. This setup is also nice for those who enjoyed the game and may be lapsed fans and just need to get the rust worn off.

The developers have a goal in mind of making this a well-balanced and exciting game of chess and keeping something that is true to the spirit of the original game but also puts some new twists on the existing formula. Doing something like this enables the game to reach not only fans of the base game by keeping that completely intact with online and local multiplayer, but also lets people learn the game from the ground up if they want to while enjoying a twist on the regular game when they gain skill at the base game. It's a best of both worlds mentality and one that helps Super X Chess stand out. The game is available now on Linux, Windows, and Mac OS and should run on anything made in the last five years - it's a fairly low-spec game and very friendly towards legacy hardware.