A Damsel Release Date Is Announced For Linux 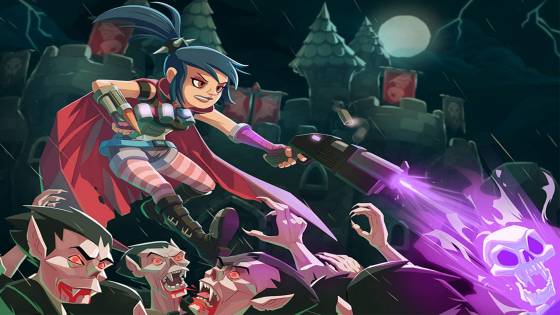 Damsel is a uniquely-named game with an interesting premise. The self-titled character's platforming debut isn't just your run of the mill action platformer. Instead, it's a very speed-focused affair that involves not only slaying enemies - but saving hostages. There's a quick pace to everything, but also room for it to slow down and give players a chance to catch their breath. Doing so allows you to do things like disarm bombs and hack servers to give yourself the upper hand.

Action platformers are nothing new - but they are somewhat rare on computers. Most are console-centric games or ports, with very few being optimized for the platform. Damsel is being designed with computers in mind and offers up a healthy mix of fast action, projectile shooting, and snappy jumps. The comic-inspired world shines with detailed artwork that makes each stage look different. Extreme colors are used for every stage, while the color pink is an ever-present part of the game for things like icons and in-stage lighting hues. Damsel's dark world gives off an almost BloodRayne Betrayal-esque look and it's stunning to look at.

Damsel has been in the works for four years, and with that time has come a high level of polish. All of Damsel's movements are incredibly fluid, and things like the detail work involved with her flipping enemies over or just grabbing onto ledges to gain a better vantage point stick out as a result.  Each enemy also has a unique walking animation, and it makes encounters with different enemy types feel different even if your tactics to defeat them remain relatively unchanged.

Fortunately, Damsel has a fairly diverse amount of ways to dispatch of rivals. She can blast them away with a shotgun, or knock them out with melee attacks. Her dash allows you to go from foe to foe quickly and try different attacks in a different sequence with each one. You may want to start with a melee attack and then transition into a shotgun blast to take out an enemy on the left, before switching things up and reversing the order on the right-hand side.

The game's story stands out too and involves an evil corporation spiking energy drinks to make people vampires. This is obviously a bad thing, and while it would be cool to slay vampires with a whip as well as a shotgun, we'll just have to settle for shotgun blasts to end their suffering for the time being. The stages themselves are fairly small, self-contained areas that make it perfect for quick sessions. You can also choose to play the game without the risk of dying - enabling players who want to just enjoy the story to do so without punishing them. On the other side of the ledger, you can also adjust the difficulty to suit your needs if you want a bigger challenge and even take on super-challenging side modes to really get your blood pumping.

Damsel has been in early access for a while but finally launches on October 19 on Linux and Windows computers. It features full controller support - so those who want a console-like experience can have one, while those favoring a keyboard can use that as well. The game can be pre-purchased for $19.99 - but will get a 25% discount upon launch week. Early adopters save a nice chunk of change, and the game itself was a PAX Rising finalist this past year.