After Nearly 25 Years, Streets of Rage 4 is Punching Its Way Out 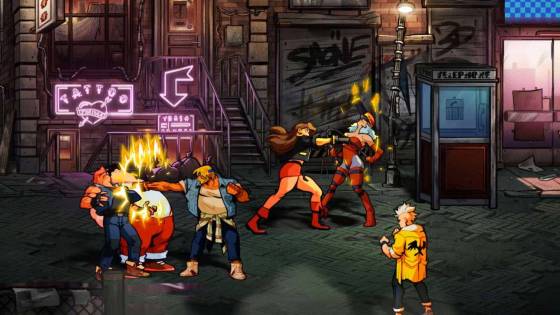 Well, this was unexpected. I think it's safe to say that for many who grew up in the 90s, Streets of Rage was really awesome. The Streets of Rage series (called Bare Knuckle in Japan) was developed by Sega in the early 1990s for the Sega Genesis. The first game spawned out two more sequels, Streets of Rage 2 and 3, in 1992 and 1994 respectively, just before Sony flew in and knocked Sega out of the console competition. The three games have seen ports on many-a-platform over the years, but an actual fourth entry in the series is something many probably only dreamed of. Today, publisher DotEmu and developers Lizardcube & Guard Crush Games announced Streets of Rage 4, an official sequel to Streets of Rage 3.

The announcement was accompanied by an extremely hype near-minute long trailer, showcasing the game's flashy and artsy hand-drawn visuals. As you may remember, developer Lizardcube were the ones responsible for the remake of Sega's Wonder Boy: The Dragon's Trap, which released just last year sporting a very similar hand-drawn aesthetic. Developer Guard Crush, meanwhile, were the ones behind 2015's Streets of Rage-inspired 'Streets of Fury'. According to the announcement, Streets of Rage 4 will have an all-new story that sees the return of series protagonists Axel Stone and Blaze Fielding, all set to clean up the city right where they left off in the last installment. Both characters are shown prominently in the new trailer, utilizing new designs compared to before.

The Streets of Rage series is well-acclaimed as some of the most popular beat-em-up games of all time, coming out just before the classic genre soon started to die out. Streets of Rage 4 will focus on the initial trilogy's beat-em-up gameplay, building upon it with new mechanics. A brief snippet of gameplay can be spotted halfway through the trailer, and it really does look true to form. This is all backed up by a slick and catchy electronic soundtrack, something the original trilogy was popularly known for. The game was brought about by a partnership between the developers and Sega, so everything looks to be staying very faithful to the older games while making it all nicely suited for modern consoles and audiences. The game will also be playable in co-op, alongside single-player.

No platforms or release dates/windows were confirmed just yet for Streets of Rage 4, so for now, we just have to get the hype at the trailer and wait patiently for more information. This marks yet another classic series that DotEmu has brought back, as the publisher recently revealed that they'd be putting out a sequel to the retro game Windjammers. Because of this, it begs the question if we'll see even more older titles come from them down the line. Below is the official reveal trailer for Streets of Rage 4, which you can view in all of its action-packed glory. The game also has a stylish official website, so make sure to check that out for more information. Welcome back, Streets of Rage! It's been too long.