Arcade Spirits Gets a Release Date on Linux, Windows, and Mac OS 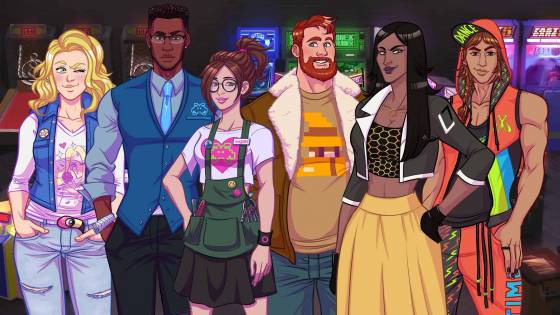 Visual novels have seen a massive uptick in popularity over the last five years with things like Broken Age and 2064 showing how the genre is as strong as it ever was. They have been a regular part of indie releases, and now a new romantic-themed one is set for release very soon. PQube has created a wide variety of games and this showcases their first big visual novel. As a new hire at a game arcade in an alternate universe where the '80s North American console crash never happened, you're in the vague year of 20XX and instead of fighting robot masters, you're learing about the world around you and the people in it.

The world you're in is very much a modern-day '80s, with neon everywhere. Seeing things like neon holograms and neon lighting on every arcade board gives the game a unique look. You're able to tailor your character to your liking. You can pick their gender, skin tone, hair color, and eyes with everything being reflected in the game's artwork as well to help everything gel together. The core game is a visual novel and there will be some RPG-infused elements that allow you to make a relationship with an in-game character purely platonic friendly, or more - with a total of seven characters available to be in a relationship with. The game allows you to track how you're doing with each character, which should make it easier for players to go down their desired path with the character of their choosing. Often times in games like this, it's easy to lose track of all of the characters - so having a tool bult-in to prevent that is a nice quality of life measure.

Each of the characters is part of the main cast, which includes a long-term friend, a friend who is good one numbers, another who is good at dancing, one who loves to cosplay, one who loves to chase scores, a highly-competitive one, and a great problem-solver. It's a diverse mix of people and that alone should allow the game's dialogue to be more engaging. Far too often with visual novels, things go down a single path and the dialogue tree stagnates a bit. This results in things becoming too predictable and that kills the flow of the story.

With a romance-heavy bend, Arcade Spirits stands out from a lot of visual novels by focusing on a family-friendly way to tackle adult subject matters. Arcade Spirits will be released on February 12 right before Valentine's Day - enabling those in a romantic mood to enjoy a new game. The game also has a free demo, so you can enjoy it and see if you like the game's format before the full release. The demo just received a major update with voice acting in some key scenes, and some revamped character art to make it easier to see them and show their proper proportions within the scene they're in.