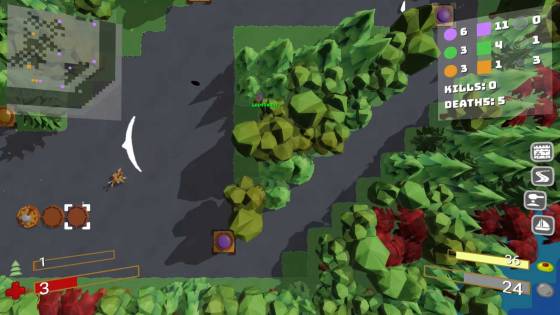 WobblyTrout's first game is upon us, and it's a unique mix of action and strategy with a terrain capturing mechanic. You control a tank as you battle others and aim to capture all of the enemy bases. You can also use turrets to lay down the heavy fire quickly but at the expense of precision. Taking over bases is your primary goal, and taking out enemy tanks will give you a more open path to conquering their territory.

The top-down approach makes it very easy to aim and attack exactly what you want and went you want, while the game's art style stands out in some interesting ways. It uses models that appear to be both fairly simplistic for the tanks and ground units while filling the world itself with heavily-detailed trees and other foliage. This makes the world come alive in a way that almost resembles a claymation game - which is something that hasn't really been done in many years. It was a bit of a fad in the early '90s to release games that looked like they could've fit right in on Saturday morning TV - whether it was something like Clay Fighters that also saw to cash in the fighting game crash or something like Claymates that just wanted to join the me-too platformer crowd.

Armoured Alliance looks like a blend of Combat from the early days of gaming with a tiny bit of Command and Conquer - but more of the former than the latter. There doesn't appear to be an in-depth base-defense system, which is both good and bad. For those new to RTS-style games, it's easier because you have less to worry about and can focus on the tank-based offense. The obvious downside to this is that for folks wanting a more in-depth strategy experience, this just isn't going to cut the mustard.

The big key is that the game does give you some ways to expand on the experience. If you want, you can send a crew out to build walls to enhance your defenses or roads to help you get from your area to the enemy base faster. You can also have them build more turrets and if you so desire, just stay in your base and let the turrets do the work. This hands-off approach is risky, but may work for some who just want to try a different way of playing that doesn't involve them seeing a ton of action quickly.

Beyond tanks and turrets, you can also lay down landmines to deal out damage. The game also gives you the ability to battle AI or go online and battle real-world foes too. As with any strategy game, it's usually a smarter idea to fight offline for a while until you master the mechanics and then go online to test your skills. Armoured Alliance is available now via Steam for $10.99 and is playable on Linux, Windows, and Mac OS devices. It's not a resource hog by any stretch of the imagination and should run on anything made in the last five or so years.