At Sundown: Shots in the Dark Hits Steam for All Platforms 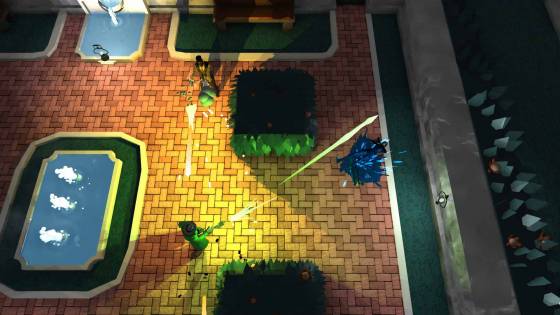 Wild Beast games has never created a game before, but their debut effort has shown great promise over the past year. Having a free demo available makes it easy to get a sense for how the final game will play out, and enables future players to see just what they might like or maybe not like about the full game. The look of the adventure is quite unique as the entire world is largely bathed in darkness, with light being present in the world - but only the real-world lighting and your own weapons providing light sources. You have sword slashes akin to a light saber that give you a beam of light in a small, concentrated area. A gun will give you a larger laser-like beam, but its ricochet effect means that its lighting will bounce around.

There's a heavy stealth element here, as being visible means that you have taken a risk in going for an attack. You are invisible in the game's world until you shoot, dash, or slash - meaning that your own offensive maneuvers can be your downfall quite easily. The small arenas bring back the frantic feel of something like a Quake game, only with an overhead perspective that is more akin to Time Recoil or Hotline Miami. The art style is very much like the former, with polygonal graphics, while the heavy emphasis on lighting and bathing the screen in colors only when necessary, does evoke a bit of Hotline Miami.

At Sundown brings back local multiplayer with a vengeance with four player support locally and online - ensuring that no matter what your preference is, you'll be able to have a lot of fun. Deathmatch modes are available and enable you to not only take out foes - but also take over a bit of the territory as well. Those who want to enjoy a single player game can do so with offline bots and challenges. The challenges are a wise idea to undertake if you want to get better at the game in order to excel online. Each of the game's maps has six zones to dominate and learn from - with each area having a different theme to it. As you spend more time playing the game, you'll get the ability to unlock new parts to the stages.

There are 18 total maps to enjoy with 17 weapons spread across them - not including power-ups to boost the damage you can do or reduce your cooldown. Being able to play solo is rewarding, but can be too tough for some. Thankfully, you can play cooperatively if you want to and then do battle one on one at the end of your journey together. With overhead stealth-action games being in short supply, At Sundown: Shots in the Dark looks like a solid entry int he genre and can be yours on Steam for Linux, Windows, or Mac. The game's normal price is $14.99, but early adopters can save 10% and get it for $13.49 if they buy it before January 29.