Batman Arkham Collection Available For PS4 and Xbox One 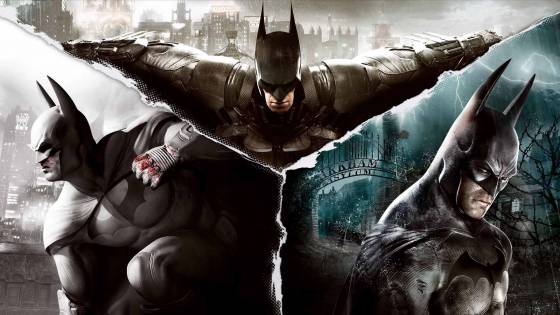 For a very long time, video games and comic book properties weren't a good match for one another. While comic books had iconic characters and great storylines to base video games off of, developers have often struggled to make them work in the video game setting. While there were gems like Spider-Man 2, not many others lived up to the hype. Then, out of nowhere, Rocksteady came along and developed the Batman Arkham series. While Batman had had numerous games in the past, both in 2D and 3D setting, many of them weren't that good, but Arkham Asylum, Arkham City, and Arkham Knight changed everything.

For these games weren't just good, they were great. They brought the mystique and power of a comic book story and infused it with cutting-edge graphics and free-flow combat gameplay that made it a joy not just to play, but to experience. For many, it was their first chance to truly "be the Batman" in a video game. The titles weren't just successful commercially, many of them earned awards and nominations across the board, including getting Game of the Year in some cases. Arkham City stood tall as the one to get the most accolades, but Asylum and Knight had their own successes too.

For those who have the PS4 and Xbox One and haven't gotten the chance to play the games yet, you're in luck, for new listings have revealed the Batman Arkham Collection, which compiles Arkham Asylum, Arkham City and Arkham Knight together into one package. What's more, the listings note that all of the DLC for the game (new maps, story content, Batman costumes, and more) will be included at no extra charge.

For the Xbox One version, if you happen to have the Xbox One X console, you'll find that the collection has enhancements to make the game even prettier to look at and more fun to play. And the PS4 version won't be slouching either, for the system loves to push the graphics just as much.

To the ones who have followed the series since inception, you might be wondering why the game collection doesn't include Arkham Origins. Well, that's because the game is both canon...and not. You see, that game was made by WB Montreal, not Rocksteady, and it even had a lot of different voice actors playing the various roles. While it did make an impact with players, it wasn't considered by many to be " a part" of the universe.

Ironically, after the success of Arkham Knight, Rocksteady has been a bit off the grid in terms of making games. They've noted that they aren't going to be making a new Batman game, but have teased in the past that they would be up for making another DC Comics character title. Many have speculated that Superman would be next on their list, and many "leaks" have supported this. But as of yet, no confirmation has come.

In the end though, this is the definitive Batman game collection, and if you haven't played it yet, you can do so now.