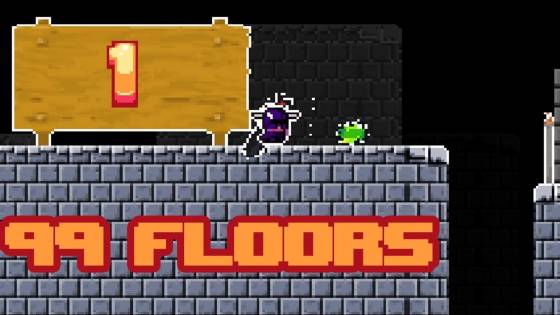 There's nothing like the spirit of competition to drive people to do something they didn't think was possible before. And for gaming, competition can drive someone to push themselves beyond their skills and attempt to win either the game or a prize. If you're seeking such a rewarding experience yourself, you need to look no further than the game called 99 Floors. For this Roguelike's developer has opened a challenge, a rewarding one. For if you are able to beat 99 Floors, within the guidelines of the rules laid down, the team will give you $5000 as a "completion bonus" of sorts.

Now, on the surface, that may not seem like a challenging thing. After all, games are meant to be beaten, even the difficult ones like the original Donkey Kong arcade game and the Dark Souls saga. However, with 99 Floors, it's a different story. As the team notes on their website, the game was designed to not just be a Roguelite title, but be something more challenging and addictive, on the site they note:

"The idea for the game came from wanting to develop a roguelike so endless and difficult that it would be "frustratingly addictive" for the player who wished to complete it."

The game has been out for about three months, and the teams lead noted that they are stunned by how well the game is doing based on the fact that they had no marketing budget and thus decided to set up a prize pool for those who could actually beat the game, which would be no small feat, for the game itself is designed in such a way to make it near impossible to get through.

You see, 99 Floors indeed does have 99 floors, all part of seven themed stages meant to test your skills. The further you go down, the more enemies you're going to see, the more traps you'll have to avoid, and the more danger you'll be in. In the three months since its release, no one has beaten the game within the rules of the competition, which proves just how difficult it is.

What are the rules? 1) You must beat the game without using any cheats, glitches, or exploitations of the title. 2) Like a good Roguelite/Roguelike, you have one life, so you have to win the game without dying at any point. 3) You must be playing the latest version of 99 Floors, past version completions won't be accepted. 4) You have to do it alone, no co-op completions allowed.

Finally, when you "submit" your victory, it must be done on one continuous video feed, you cannot have any breaks in the video, else the team will think you are cheating by splicing together separate runs.

Should this feat not be conquered, the prize pool will go up. But for those seeking the money, you likely shouldn't wait. The challenge has been laid, are you up to it? Do you think you have what it takes to conquer 99 Floors?Check out the details on their website.