Bethesda To Be Sued Over Fallout 76’s Power Armor Edition? 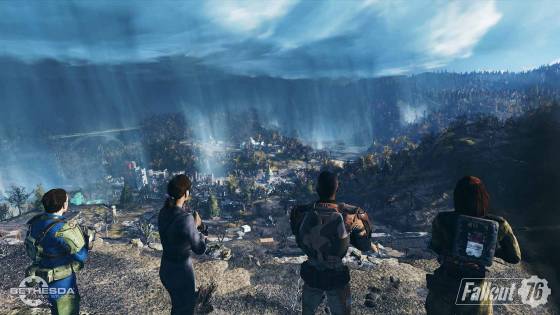 Fallout 76 has had a bit of a rough time since launch, and it's only getting worse as time goes on. When the title was announced earlier this year, gamers were excited, as the Fallout series is very beloved. But as details started to come out about it, it got more and more gamers skeptical about what was going on with it. First and foremost, this was going to be the first Fallout title to feature full online integration, making it more like an MMO than an RPG. And as the beta went on, even more issues started to pop up. But, that was par for the course for the online genre.

However, when the game launched, while it wasn't unplayable, there were many oddities and glitches that made the game somewhat tedious to play. Again, given the genre, there was going to be a "feeling out period", and Bethesda has made notes about what they are going to do in order to fix some of the problem, but for one group, they're aiming to do more than make Bethesda fix things.

On Reddit, a post from a group that is an apparent lawfirm called Migliaccio & Rathod LLP is aiming to sue Bethesda for "deceptive trade practices". Or to put it in more basic terms, they're going to attempt to sue them on the basis that they released a very broken game for full price, versus say what happens with Steam Early Access in that the developer fixes a great majority of the games issues before release.

“Migliaccio & Rathod LLP is currently investigating Bethesda Game Studios for releasing a heavily-glitched game, Fallout 76, and refusing to issue refunds for PC purchasers of the game who found it to be unplayable because of its technical problems."

In regards to the PC refund issues, some PC players were told that Bethesda would refund Fallout 76 if major issues were had, and yet, when gamers tried to do this, it didn't work, Bethesda refused.

Whether this class-action lawsuit can actually happen is up for debate, and many on Reddit see this as a sham offer to try and get money, and nothing else.

However, there is some grounds for their deception. For example, in the Power Armor Edition of the game, Bethesda promised a canvas bag to carry the Brotherhood of Steel helmet that would come with the edition. When gamers and reviewers got the bag, they were shocked to find it was not canvas, but rather, nylon, and a cheap version of Nylon at that. This is in direct contrast in the description of the Power Armor Edition where it specifically said Nylon and not canvas. According to a statement from Bethesda:

"Unfortunately, due to unavailability of materials, we had to switch to a nylon carrying case in the Fallout 76: Power Armor Edition. We hope this doesn’t prevent anyone from enjoying what we feel is one of our best collector’s editions.”

This is another case of "deceptive trade practices", and could actually lead to legal issues should someone want to take up the banner.