Bow To Blood Is Set To Release At The End Of The Month, Exclusively For PS4 VR 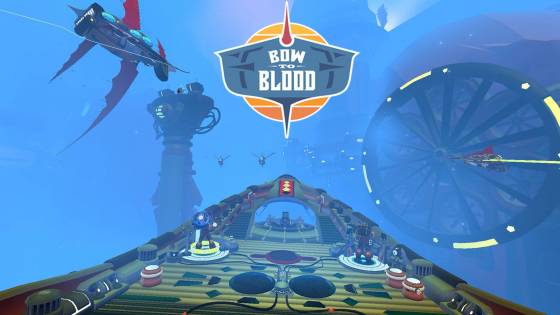 The continuing success of PlayStation VR has led to the creation of yet another new exclusive for the device, this time it’s an action-packed, sci-fi-arena game “Bow to Blood.” Bow to Blood is releasing as a single player game and is being developed by a small gaming studio known as “Tribetoy.” The game was first announced back on October 30th, 2017 during the 2017 Paris Games Week convention. The game's announcement came with an announcement trailer which showed off the main idea of the game. In Bow to Blood, the main premise of the game is you take control of an airship as the captain of the airship and you manage a crew to try to win it all in a gameshow arena that has you play against other challengers. Bow to Blood gives the player the ability to control over several aspects of their ship other than just your crew, some of those aspects include the ability to route power and being able to take aim and control your weapons. The captain can even pull out a sidearm if your enemies get too close to your ship. If you want to watch the first launch trailer you can watch that below.

In the game, you try to get the love of the audience to help yourself win sponsorships that will give you awards and give you a slight lead ahead of the other competitors. A neat feature of Bow to Blood is the game’s friend or foe choice system where the game allows the player to choose whether to help other challengers or gives the player the right to exploit weaknesses and attack other challengers. The challengers always remember the player's actions and according to the developer the AI challengers can hold a grudge on the player depending on the course of action the player takes. Each playthrough is different and unique in Bow to Blood. The game has randomized events and each playthrough shows the player new environments and opponents. The game has a variety of different challenges from the game's overseers including high-speed races, harsh battles, and unspecified “mind-bending challenges.”

Bow to Blood is releasing on August 28th and will cost $29.99 USD. There has been no word on any type of multiplayer functionality, but the game will be releasing with a companion app that you can download on either your windows computer or android phone. The companion app will allow players to either help or worsen other players chances of winning in the arena. The game is having a 20% off sale at the time of writing this article on its PlayStation store page. This deal is only offered if you pre-order the game. If you are interested in getting the game, it’s a pretty good deal bringing the game down to a modest $23.99 USD. If you want to learn more about Bow to Blood or want to check out any of the other trailers that have been shown off including the games one-minute launch trailer you can check out the game's website and Tribetoy’s YouTube channel.