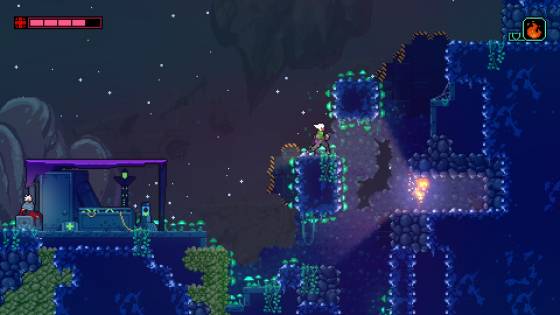 Celeste was one of the standout indie gems of this past 2018, coming out right around the start of the year and giving us a heartwarming story-based platformer with tough-but-fair difficulty. It even secured the coveted spot as a nominee for GOTY at The Game Awards a few weeks ago. What many may not know, however, is that the developers over at Matt Makes Games were in the midst of working on another title alongside Celeste. This other title, going by the name of Skytorn, was going to be a procedurally generated metroidvania game. If you have knowledge of the two genres, that matchup may sound pretty intriguing. However, Skytorn is now no more. In a recent blog post, Celeste designer Noel Berry announced the bad news, and went into the history of Skytorn's development. But the big question is: Why did the game get canceled?

According to Berry, it was due to the clashing nature of the above two mentioned genres. Metroidvania games follow a format of sprawling open maps with a lot of backtracking, finding new ways to explore areas you've been to before. The addition of procedural generation, something Matt Makes Games felt was core to Skytorn's gameplay, made it difficult to balance the two. "Having worked on the game for several years," reads the post, "we constantly struggled with what the game was. To its core it was a procedurally generated adventure game without permadeath, but the procedural elements always clashed with the Metroidvania themes, and I didn't know how to design around that. The story & progression slowly became much more linear as a result of being unsure how to tackle an open & randomized world." It's with heavy hearts that the news was shared, as the game was fairly far along in development, with a lot of assets and gameplay systems already completed.

Skytorn's development actually began far before Celeste came into being. Its history dates back all the way to 2012, when Berry quit going to university so he could start designing games as an indie developer. Thus, Matt Makes Games came together, starting work on their new video game: Skytorn. Development progressed for a long time, until eventually, the studio participated in a game jam in 2016. Game jams are like quick development sessions that last for about 2-3 weeks or less, where developers are tasked to make a game from start to finish in that time span. Celeste was born of this game jam, and when the scope of that project grew bigger with time, Skytorn's focus got diminished, thanks in no small part to the tricky balance of its gameplay development. Once Celeste finally released in full, the studio had a decision to make: Rework Skytorn into something more cohesive, or axe it altogether and work on something new instead, bringing the lessons they learned along with it. Now, it seems they've gone with the latter.

The good news is that this means Matt Makes Games is starting work on a brand new project. Berry wasn't able to provide any info on that, only assuring that they'll have news to share on it sometime in the coming new year. Whatever it may be, there's no doubt the new game will carry a bit of Skytorn's DNA within it, and Celeste's too, as it pushes forward into the cycle of development. Celeste was a big success for Matt Makes Games, and that success will in turn carry over to an even better quality title someday in the future. As for Skytorn, may it rest in peace. At least there's still the pretty artwork to admire. If you want to give Matt Makes Games' other game some love, Celeste is available on pretty much all major platforms: Windows PC, PlayStation 4, Xbox One, Nintendo Switch, Mac OS, and Linux. It will be getting an update here soon, timing in closely with its year anniversary, that will add in a set of new "very hard" levels for fans to enjoy. Oh, and don't forget to read Berry's blog post about it all. It's an interesting story to read, especially for any current or aspiring indie devs out there.