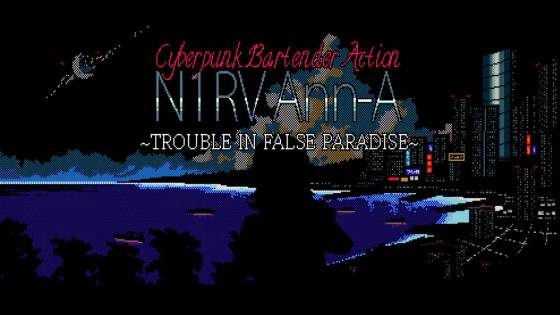 If you haven't heard of VA-11 HALL-A yet, that's likely due to the smaller amount of platforms it's available on. Well read on, because not only is that about to change too, but the game will also be getting a sequel. The developers over at indie studio Sukeban Games recently announced the sequel with a very flashy new trailer, one that shows off gameplay and artwork of the next game in action. It's likely due to VA-11 HALL-A's success (200,000 copies sold between both platforms) that we're seeing the sequel come to life. The sequel goes by the mouthful of a name 'N1RV Ann-A: Cyberpunk Bartender Action'. If you're still not sure what this is all about, picture it like this: Bartending in a dystopian future and getting to know all the characters' lives.

Essentially, that's the formula of the first game. You play as a bartender named Jill who works at a small but chill bar named VA-11 HALL-A, serving drinks to a variety of customers and trying to make ends meet in her daily life. Gameplay primarily takes place in the bar, where customers will come up and request something, you'll do your best to make it, and then you'll listen to their stories and lives and get to know them better. Depending on how much or how little alcohol you choose to serve them, what they tell you can change entirely. When not working at the bar, you'll be paying for bills and decorations at Jill's apartment, where she muses about life while hanging out with her cat. As you can see, it's a very relaxing and laid back experience, something the developers intended when making it.

While the first game was set in Glitch City, the sequel takes place in a setting known as Saint Alicia. Once again, you're playing as a bartender (this time named Sam), who is doing her best to take care of her eight-year-old son alongside her partner Leon, who just so happens to be a member of the Yakuza. The game sports VA-11 HALL-A's gritty electronic soundtrack, something that game was highly praised for. In a shake-up from before, N1RV Ann-A features a slightly different art style that seems more inspired by the likes of 90s Japanese anime. It also has fully animated cutscenes, both in conversations and out. All in all, it's a real looker, and it's clear Sukeban has improved upon what all made the original so great.

The heartening news behind all of this is that both VA-11 HALL-A and N1RV Ann-A are making their way to multiple platforms, meaning a lot of people will get to experience both titles. Originally, VA-11 HALL-A was just a PC exclusive and stayed that way for a little while. It ended up selling so well that it got a port to the PlayStation Vita last year, and is now expected to make its way to PS4 and Nintendo Switch in early 2019. N1RV Ann-A is being projected for a 2020 release date, which still feels kind of far away. Good things take time though, and once it's available you'll be able to play the sequel on PC, PlayStation 4, or Nintendo Switch, all the platforms the original will be available on minus the Vita. The lack of a Vita inclusion for N1RV Ann-A is due to Sony discontinuing support for the handheld in 2019, which will be sad to see go. Make sure to check out the trailer for N1RV Ann-A below, as it just might be the kind of game for you.