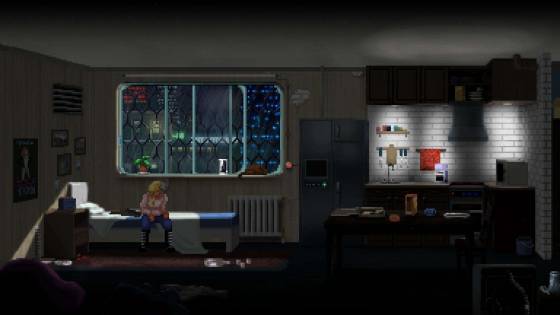 Cyberpunk-set games are becoming a bit more in vogue, with titles like Cosmic Star Heroine combining them with future-set science fiction quite well.  Born Punk is the first game from Insert Disk 22, a company founded by a man named Falko who has been into PC gaming since 1984. This time period was renowned for many adventure games, and you can see the influence of that time's adventures on this even in just the demo. You have to explore a very small room to cure a hangover - and in doing so, go into meticulous detail to solve the problem.

The point and click genre have had some ups and downs since the '80s and '90s, with the '90s seeing a bit of an upswing in overall popularity. Over the past half decade or so, games like Broken Age have tried to bring it back to life, but nothing has helped bring it back to prominence.  Born Punk has a very good chance at standing out from the pack thanks to its mix of high-fidelity pixel art that goes far beyond anything you would see in the '90s and is in line with concepts you would see for artwork in that era but no hardware could actually support playing a game that looks like it.

As Eevi, a hacker down on her luck, you have to help her unravel a giant conspiracy. What starts with her being infected by a rogue AI becomes a tale involving diverse characters and a large cast that each has their own motivations in the world. It's got a more open-ended approach than a lot of adventure games too and allows you to use either brains, brawn, or a blend of the two to solve problems. You could try a brute-force approach to get through a door and increase your risk, or go the mental route and solve some logic puzzles to get a keycard and enter another, much safer door. An adventure game with a heavy amount of choice is quite rare, and bodes well for Born Punk doing well with its Kickstarter when that launches on February 5.

One big downside to modern adventure games is that so much challenge is removed in the name of making it more accessible. In doing so, the player doesn't learn anything about critical problem solving which can actually help you outside the game. When a player is challenged with a problem and not given an immediate solution, you have to use your brain to try and solve it. By allowing for more kinds of solutions to problems, Born Punk opens the door for people who don't think the same as others and whose brains are wired a bit differently. It's a great option and something that can expand the game's audience not only in the short term but the long-term as well. The Kickstarter is set to run for a little over a month and end on March 7, with a demo playable now on Linux, Windows, and MacOS. The full game is set to launch on all of those platforms, plus both iOS and Android and all major consoles as well.