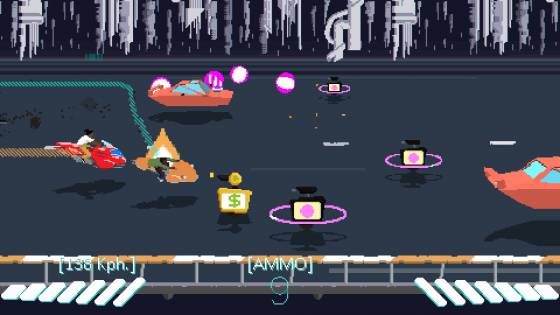 Akupara Games is here with an all-new game that blends a mix of hoverbikes with shooting and racing alongside high-resolution pixel art.  It's odd to see a game try so many different genres, but Desert Child does that and more. Adventure games are also covered, as you have to go from place to place and explore the world. Your overall goal is to leave Earth before it blows up, and winning the Grand Prix allows you to go to Mars and escape the planet.

While it is a pixel art game, it takes more cues from anime than it does a regular adventure game. Cowboy Bebop inspires the game's multi-planet system, while Akira is used as an inspiration for things like rich skies and Redline for its speed and hovercrafts. As a money-starved racer, you earn money not only by racing - but by exploring the town. You can meet someone who wants you to throw a race for X amount of money and choose to do so. You'll lose some reputation, but it will allow you to earn more cash quickly.

In another similarity to Cowboy Bebop, you can also take on bounties and capture people. Doing so will be riskier, but net you more money than a traditional race would. No matter what you do, you have a time limit of two in-game weeks to work with as, after that, you will wind up with tickets to Mars having a giant price hike. There's a lot to do beyond bounty collecting and racing though. You can deliver pizzas, collect parts, and have fans help you out. The adventure game portion of things showcases the whole world, with the ability to battle with local gangs and even eat at local restaurants enhancing the feel of this being a living, breathing world.

There's a combat system in place too, allowing for some non-bike combat to mix things up too. The game's soundtrack is a mix of chiptunes and hip-hop and evokes a bit of Samurai Champloo - which further fits into the Cowboy Bebop inspiration as that was another Sunrise production from the same creative team with a heavy hip-hop bend to it. While the game's themes may seem like they're family friendly, it is a game that is heavily-inspired by more mature content like Cowboy Bebop and it does have an M rating for language and tobacco usage. Still, for someone seeking a new style of game, Desert Child looks like a solid pickup.

Desert Child is available now on a variety of platforms. Beyond being playable on Linux, you can get it on PC via Steam and GOG as well as Mac OS X. Console owners can also enjoy it via the PlayStation 4, Xbox One, and Nintendo Switch. The latter version allows you to play it both on your TV and on the go – making it the best overall console version to buy for the convenience of being able to play it anywhere.