DYSMANTLE is Getting Linux Support On Day One 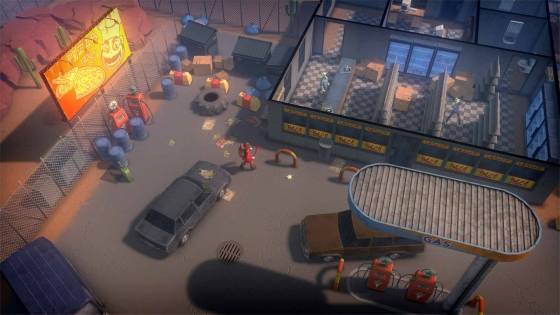 10tons has made some of the best and most engrossing twin-stick games on the market over the past five years. Tesla vs. Lovecraft offered up a scientific twist on the genre, while Time Recoil blended Hotline Miami-esque action-puzzle gameplay with a spy thriller.  They rose to fame with Crimsonland, which was a mix of a twin-stick shooter and an original DOOM-esque setting with tons of bloodshed. Now, they're back with a mix of twin-stick shooter and survival - something that really hasn't been done yet. There's a heavy crafting element alongside a healthy dose of monster killing.

For the first time, they'll be dabbling in a bit of RPG action as well and the survival side of things is a bit more involved than most, as you will actually have to build up your base from scratch. Fortunately, getting resources is a bit easier than it would be in most games since the world is highly-destructible and useful for you. Most of the in-game world can be destroyed and used as raw materials for the crafting system. This allows you to augment your base, weapons, items, and build new armaments as you see fit. You can choose to stay put and avoid damage and survive longer - but in doing so, you run the risk of avoiding higher-end enemies and thus gaining rarer pickups.

The game features a bit of melee combat with things like knives and axes alongside long-range weapons like guns. Beyond being used to kill enemies, you can also use these to kill animals and other prey to create healthy meals. If you don't want to kill animals for meat, you can choose to fish, or combine all of them and ensure that you have a lot of food ready to go in case times get tough. You can also find recipes to boost your stats or create new gear from scratch using the Fabricator device to do all sorts of magical stuff-creation out of nowhere.

There appears to be quite a bit of environmental variety, which is fantastic. One problem that plagues survival games is the feeling of sameness with their environments. Here, you have wide-open areas for places like forests, but also water-heavy areas and your regular, everyday neighborhoods. The look of the latter really brings home just how much damage has been done to the world as a whole and reminds you that that was once a living, breathing world. Hunting, fishing, and farming allow you to keep a steady supply of food available and you can even craft a makeshift zoo if you want to. There's a lot of variety to do whatever you want to with what the game provides.

Fortunately, hunger won't kill you - but satisfying it will make you stronger and healthier with permanent upgrades. This means that you always have an incentive to hunt and kill without being punished for not being able to do it very well. The team at 10tns is very small and the game has no set release date - but does look quite promising and will come to Linux, PC, Mac, and even the Switch when it's finally ready for release.