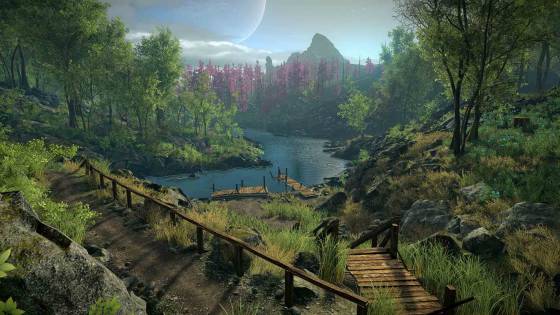 First-person exploration games haven't really been done to a major degree - even though things like Perfect have aimed to give you a bit of that. In cases like that, you have a game that relies on virtual reality to relax the user and allow you to explore a very small world. However, what the world lacks in size, it makes up for in terms of interactivity - but it is still very small-scale. Eastshade sets out to do something similar, but in a purely first-person viewpoint without relying on VR and greatly expanding on the size of the game's world.

Eastshade has been in development for over five years now and features a unique premise. As a traveling painter, you want to explore the Island known as Eastshade and paints its beauty. The look of the game instills is very reminiscent of Myst, with photo-realistic worlds. The biggest difference here is that the entire in-game world is polygonal and highly-detailed in ways that everyone imagined Myst looking lack but it actually didn't. Since that used photos, it was ahead of its time visually - but its interactivity definitely suffered. Eastshade seeks to offer the best of both worlds by giving you not only a stunning world, but one you can fully explore.

Beyond capturing the beauty of the world, you will also talk to the citizens of the island and learn about not only them, but the island. Talking to people allows you learn about them and help them if they need it. You can also make friends and stay in hotels to rest up. There's a surreal element to things too, as you can use supernatural areas within the world to reach new places.  The painting aspect is something that allows the game to stand out - and it uses lush color to replicate the game's world in watercolors. Creating a wide variety of paintings is rewarding not only to create, but also to use as a means to make friends and allies. Some want them for certain areas, while others will take them as a form of payment to give you rare items and other things. You'll need those to craft materials for the in-game crafting system. Crafting things allows you to overcome obstacles in the game and solve some of the game's more obtuse puzzles.

Eastshade now has a release of February 13 and will be released on Linux and PC alongside Mac OS X. It's meant to run on reasonably-powerful machines - so as long as you have an i5 processor and pretty much any gaming-centric graphics card, you should be okay. Those seeking an open-world exploration game that allows you to think, rest up a bit mentally, and test your brain whenever needed will find something to enjoy here. Fans of painting may want to check it out too as you don't have many games with painting as a theme – and here, it's a major part of the game as a whole.