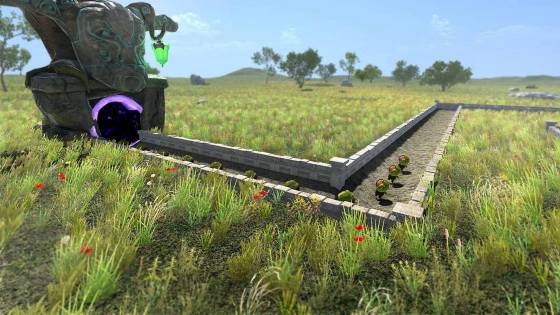 Elemental War has been in the works for quite some time, and now it finally has a release date - for its early access release anyway. The game shows great promise and brings tower defense to a new level by also blending in some RPG mechanics. This is the first game from Clockwork Origins, and it requires a lot of in-game teamwork to succeed. As a young apprentice, you will have to team up with goblins, warlocks, and all manner of specialists to stop creatures from invading your world.

The game features a variety of modes, with Hero, Classic, and Survival offering up something different to keep things fresh. Classic mode is a normal tower defense game. The goal is to survive 60 enemy waves by making sure you build your towers in the best overall way. Success will come with a bit of trial and error - and if you fail, you'll know your technique needs a bit of tweaking. You will also be able to strengthen your defenses using the seven elements to your advantage.

Survival mode is like Classic mode, but with a harder edge to it. In Classic, you at least have a brief break from the action. With Survival, waves come one after the other without giving the player a chance to regroup. Survival requires you to make sure your skills are at their height in order to survive. It will present a large challenge and isn't something you will be able to play passively. Finally, you have Hero mode. In this mode, every enemy has a unique feature to buff it. This makes things harder for you, but beating them yields newer, more powerful items to reinforce your towers.

Unfortunately, the game's Steam page doesn't go into great detail about just how all of the elements will affect the combat system. Fortunately, they do seem dedicated to supporting the game throughout its run in early access. By listening to feedback from players, they will be able to make a far better overall game than just having an echo chamber of sorts within the development team. Elemental War seems like a fairly solid tower defense game - especially for those new to the genre with its usage of five difficulty levels. This should make for a very user-friendly experience and make it more approachable and less intimidating than most tower defense games out there.

The devs are making it a very friendly experience to those who own older hardware too. It is designed to be a fairly low-spec game - requiring only 4GB of available space and the ability to run on anything with 2 GB of RAM or more available. This means that pretty much any device made in the last decade should run it reasonably well. Elemental War launches on Steam via Early Access on October 18, 2018 for Linux, PC, and Mac. Strangely, a price wasn't announced – but given the genre and in Early Access, somewhere around $20 seems like a safe bet. More info about the game can be found on Elementals War’s website.