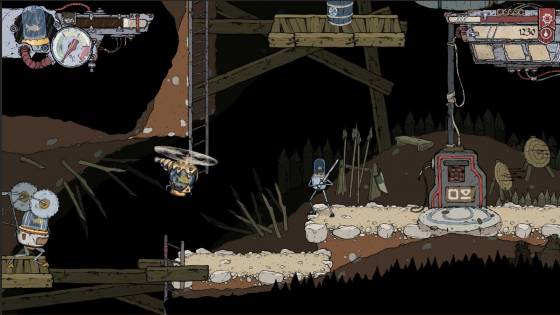 There are many platformers on the market, but how many of them allow you to play as robots controlled by fish? The answer to this is zero - until Feudal Alloy is released, then the number will skyrocket to one. Feudal Alloy is an action-platformer with a bizarre concept behind it, but some fun-looking action and gorgeous hand-drawn art. Your robot acts swiftly with a variety of sword slashes, and has a speed that is very reminiscent of Strider Hiryu when it comes to the angles in which he attacks. The worlds themselves are diverse, with a lot of traversal options. You can go down a single path, or you can swipe away at certain parts of the land and find a new path to explore.

The medieval world looks gorgeous, with a lot of detail in it. You have things like waves after waves of trees in the background, while some trees are visible in the foreground. The interesting part of the presentation here is that the trees are jet black - so they don't get in your way nearly as much as a lot of foreground obstacles do in many platformers. There's a very clear division between the background and foreground - with foreground elements having brighter colors and more detail, while background pieces fade into an almost foggy backdrop. It's a great look overall and one that stands out instantly.

While you start with a basic sword, you will be able to explore the world and find new equipment. Being able to combine your sword with things like grenades enables you to be more offense-centric, while dodges and other evasion techniques allow you to avoid damage if your timing is up to snuff. There are a lot of secret areas and hidden collectibles to find - and those seeking for a new adventure will find something to enjoy here. You can even find equipment to change your appearance and skill set - enabling the game to remain fresh to some extent as you go through it.

The dev team is only two people big and they've been working on the game for three years now.  It's a passion project and one that they've created just about everything for - beyond the soundtrack. They crafted all of the game's design, programmed it, designed the art, the animation, created the story, and they've already released one game in the form of Toby: The Secret Mine. They've clearly put everything they have into this game, and the effort looks to have paid off.

Feudal Alloy launches on January 17 and will be playable on Linux, Windows, and Mac OS. It's made to run on just about anything, which is nice and has full controller support. Beyond the regular digital game, a collector's edition will also be available that gets you a Steam key, an artbook, stickers, and developer signatures. The game will have Steam achievements will support the Steam cloud save system - although given how iffy that can be, you'll definitely want to be careful with it and not fully rely on it.