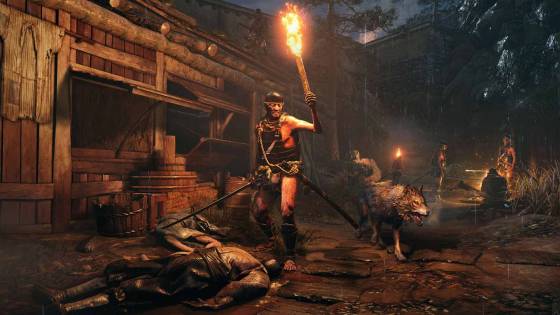 From Software has had a lot on their plate since Bloodborne's release in 2015. The Japan-based studio has gone on to put out a nifty little VR game set in an old boarding school, as well as pouring all of their blood, sweat, and tears into Sekiro: Shadows Die Twice. The latter is their next big title, and one that has a lot of the brutal action seen in past games like Dark Souls and Bloodborne alike. However, the differences between the Souls games and Sekiro run much deeper than you may think. Game Informer is doing a cover story centered around Sekiro, and so, the outlet got a chance to interview From Software themselves about the game and what players can expect. The biggest news drop? Sekiro will feature an actual pause button. Sweet relief.

As many may have already guessed, Sekiro is tossing off the multiplayer features of past From Software titles in favor of a more focused, personalized, single player experience. In Souls games, players could leave notes to others for reading, dropping hints or warnings of things ahead. Similarly, players could even be PvP attacked by others through certain conditions. Sekiro, meanwhile, has everyone playing as the same character: A deadly shinobi going by the title of 'The Wolf'. One of Game Informer's questions to FromSoft focused on this absence of multiplayer, and if we'll ever see it again in the future. "Of course, we at From, we love those online elements," stated Yasuhiro Kitao, FromSoft's marketing manager. "We love to create our own characters just as much as everyone else. We hope players are looking forward to something in the future where we might go back to that, but for now, Sekiro is very much its own thing." Naturally, this also means players can pause the game whenever they choose. Handy, no?

This single player-driven focus has enabled FromSoft to design Sekiro from a different standpoint than other games, crafting the areas, boss fights and enemy encounters into something tuned for a single individual. To this aim, the developers have also changed the way character progression and leveling up works. Money and experience points are now separate entities, and dying in Sekiro holds no penalty on either; you keep both when you die. A pretty large departure from Souls' corpse-run mechanics to be sure, though director Hidetaka Miyazaki has been vaguely hinting that death in this game does 'something'. Naturally, he's leaving this a big unknown until the game is in our hands, but he did state that the effect death takes on you is a 'detrimental' one. Experience points gained in Sekiro add up to skill points, which are applied onto various skill trees. Each tree focuses on a different aspect of The Wolf's repertoire: shinobi skills, samurai skills, and the prosthetic arm, for example. To unlock these trees, key items must be found as you explore Sekiro's world. Sticking true to the RPG systems, but going a different route with them.

Just peeking at some of Sekiro's gameplay videos shows just how wild of an action game it is. The Wolf is capable of spry movements and verticality as he fights his foes, and can utilize a colorful variety of ninja-related weaponry and tools to outsmart them. A big part of this comes in the form of his prosthetic arm, which served as the very first teaser for the game before it was announced. We don't have to wait much longer to play it, at least. Sekiro: Shadows Die Twice is leaping its way to our homes on March 22nd, just two months from now. You'll be able to play it on Windows PC, PlayStation 4, or Xbox One. Check out Game Informer's official story on Sekiro to get the full breakdown, or view the trailer down below to see it in all of its chaotic glory. From Software is trying new things with this game, and I hope it pays off nicely for them.