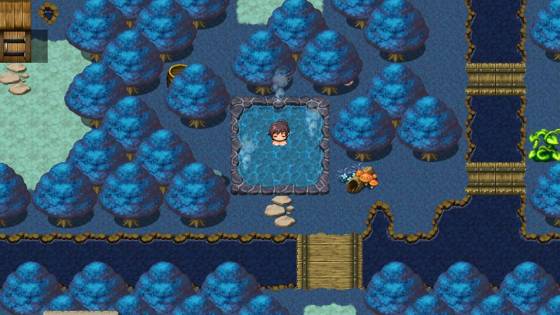 The original Game Maker was created using RPG Maker VX Ace - and it was one of the most prominent games created using that development software. Since then, better RPG Maker tools have been made, and that leads us to the creation of Game Master Plus. That has been crafted using RPG Maker MV and expands the core game while also streamlining some parts of it to improve the flow.

The core game's tale remains the same - so you're still playing as Elsa as she moves into a town with her mother and has to learn about its history. There's also a lot of weirdness in the world that you have to figure out. There's a game board in the woodland area that only works for you - and it seems like there's an elder who knows about it, but what's his connection to it? There's a lot to the game's lore to figure out and uncover, with an extensive cast of characters. There's a mystical wizard in the world too, and you have to figure out what his past is too. GM Plus lets you pick between two different classic with different skillsets and even different event occurrences.

The end result is a bit like a strategy RPG ala Final Fantasy Tactics where each class has their own pros and cons. Playing as a fighter allows you to do a lot of damage with up-close attacks using things like electrified blades. Those seeking a more passive role may prefer being a healer, as you can also add buffs to your allies alongside using magic instead of physical attacks to deal out the most damage. Game Maker Plus gives you two complete stories to play through - with one for each class, and the ability to deeply-customize your characters' skills.

This makes a lot of sense since the game is running on a creation suite - so by passing some of that onto players, it allows you to have a more enjoyable experience. You can use this to do things like adjust the enemy types you will encounter, change up your random encounter rate, or even make it so that bosses are much easier to defeat than normal. The game as a whole is set to be very easy-going, but you can adjust the challenge level in real-time as you see fit. You can also level up your equipment - so if you find a sword that you absolutely love and can't bear to lose, you can just upgrade it rather than selling it to deal optimal damage.

The game's graphics have definitely been given an overhaul compared to the first, with better-looking menus and far more detail in the world itself. While it's inspired by classics, the overall look is more akin to a modern-day mobile release, only without the bizarre graphical issues that have plagued those games for quite some time. Game Master Plus just launched on Steam and has an early bird savings of 25%. The game is playable on Linux, Mac OS, and Windows and should run on just about anything - so if you're seeking a new 16-bit-inspired RPG, give the game a look and see if it's something you might enjoy.