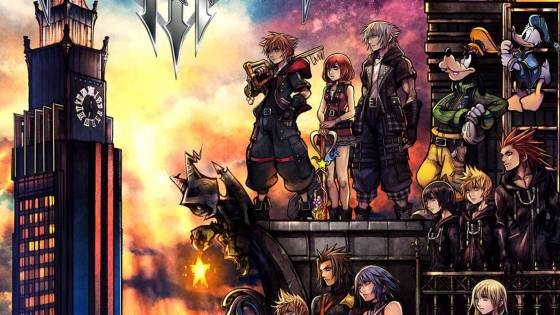 Another month, another Kingdom Hearts 3 trailer. With the game being just a few months away now, developer Square Enix has been positively spoiling us with trailers left and right. Many of these trailers highlight specific worlds that are going to show up in the game. The most recent was Big Hero 6's San Fransokyo, which also showed off the intros for Hiro and Baymax. Before that, we had E3 2018, which brought us not one, but two KH3 trailers for the Frozen and Pirates of the Caribbean worlds respectively. Now, Tangled is getting the center of attention. We knew Tangled was going to be in KH3 due to past trailers showing brief snippets from it, but now we can get a more in-depth look.

The trailer naturally focuses on Sora, Donald, and Goofy (always in that order) meeting Tangled's main characters: the beautiful Rapunzel and the roguish thief Flynn Rider. Rapunzel is setting out to see the world, and Flynn intends to escort her to the Kingdom to see it in person. In true Kingdom Hearts fashion, however, the heartless (and nobodies) have appeared in Rapunzel's world of Corona to cause trouble. The group of five venture forth with Sora's keyblade to protect them, in what Rapunzel calls the "Best day ever!" Other gameplay segments of this world from past trailers have shown Rapunzel using her magically growing hair to escort Sora and friends around. It all looks like a good, fun time, and more of what Kingdom Hearts does best.

It's bizarre to think, but it's been 13 years since Kingdom Hearts 2 released on the PlayStation 2. While the series' other side entries looked to past Disney films for further world inspiration, Kingdom Hearts 3 is taking a different route by incorporating some newer ones, like the aforementioned Big Hero 6. Since KH2's release, Disney also acquired famous animation studio Pixar. This has allowed Square Enix to throw in some famous Pixar films to the bunch too, such as Toy Story and Monsters, Inc. Fan favorites from past games have returned, including the ever-present Olympus Coliseum. According to Kingdom Hearts series creator and director, Tetsuya Nomura, one world in KH3 is comparable to the size of one previous Kingdom Hearts title. He also mentioned that "the things to do for each world are vastly different". Based on all of the footage shown so far, KH3 indeed looks to be truly massive and serves as a big step forward for the series from any game thus far.

Kingdom Hearts 3 is set to be one of the first big game releases of the new year, slated for launch on January 29th, 2019 for PlayStation 4 and Xbox One (a series first). Want to play Kingdom Hearts 3 really badly but haven't played any of the games? Just recently, Square Enix put out a massive all-in-one game collection (for PS4 only, sadly) entitled Kingdom Hearts: The Story So Far. It compiles all of the HD collection re-releases for Kingdom Hearts into one convenient package, coming with 1.5 HD Remix, 2.5, and 2.8. It's every single Kingdom Hearts tale, and a great way to spend time getting caught up on the massive story until January rolls around. You can check out the Tangled trailer just below; it's sure to get the hype train for KH3 rolling within all of our hearts.