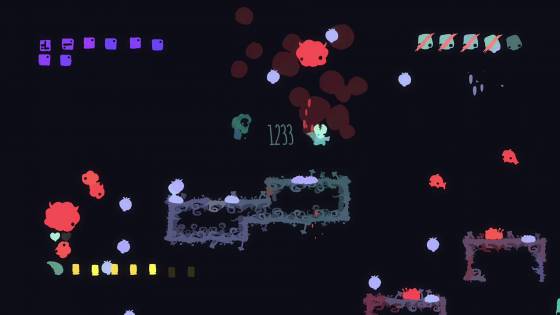 GoNNER was released two years ago and offered up something different from the norm. While it still offered up traditional gameplay styles like 2D side-scrolling platforming alongside fast-paced shooting, it did so in a way that hasn't really been seen a lot. The game's visual style alone stands out and gives you a brightly-colored set of level pieces, weapons, characters, and enemies against a dark world. The game world itself isn't all-black all the time, but usually is and it also takes the darkest possible shade of a mainline color and uses that to set the tone for the stage.

It allowed you to explore a procedurally-generated world in a score-based action-platformer with a wide variety of weapon types. Some were basic blasteres and others gave you a long-range laser to use to do a ton of damage over a fairly limited part of the screen. It offered up a fair challenge and a ton of content, with daily challenges offering up a new set of levels and offering up the same one for everyone who played to determine the best in the world on that given day on that set of stages.

The game was praised in its day for offering a fair challenge, but also offered up a bit of a challenge for patient players. The biggest part of succeeding in the game is to just be patient and take the time needed to learn its mechanics. The physics are a bit odd and do take some getting used to. The core is jumping and shooting, but like any action-platformer, the developers at Art in Heart have their own version of physics in place - so trying to play it like any other game won't work. Give the game an hour and you'll wind up hooked, and all of the different head upgrades make it play unlike anything on the market - which blends in nicely with its sharp art style that is unlike anything else on the market.

The all-new Blueberry Edition update offers up the first major improvement to the game and a slew of new content. Beyond the blueberry-theming being used to give the content a unique name, it also offers up a taste of the new theming for stages. New worlds will feature underwater elements like water and fish alongside new forests using blueberry-filled trees and bushes to fill the world out. A new head power-up allows you to headbutt enemies that are above you - a bit like attacking an enemy on a block in a Super Mario Bros. game.

New weapons are also featured that offer things like spike add-ons for a bit of extra damage or gnarly skull explosions. Those are always a good thing in games unless you're playing as the character with the skull explosion - then it's something you'll want to usually avoid. This blueberry edition content is available as a free patch to the game on PC, MacOS, and Linux on both Steam and the DRM-free GOG version as well.