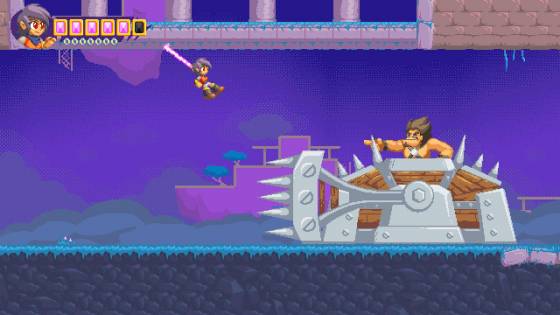 GalaxyTrail's pedigree has seen them craft a modern-day classic side-scrolling platformer in Freedom Planet, and now they're back with Grapple Force Rena. This blend of traditional platformer and Bionic Commando takes the usual "young hero saves the world" plot and mixes things up a bit. Rena's a little delusional and as such, tries to recruit all of her friends to help her save the world. She doesn't believe that she can do it all by herself, and is dismayed to find that they don't have powers as she does.

Her power bracelets allow her to emit a grappling hook from her wrists and give her something akin to either Bionic Commando or for a more genre-accurate comparison, Umihara Kawase. There are less physics at work here than there were in that game, but both star females in somewhat strange worlds as they set out to save them. Rena doesn't have a traditional attack, so she relies on the grappling hook to grab enemies and throw them into one another. You can send them into a pit, into one another, or just throw them into walls as much as you want until they blow up.

Enemy types are varied and go from basic mooks that try to attack first to time bomb-esque ones that you need to take out quickly - but can also use as a makeshift grenade in the heat of battle. Beyond these larger, more explosive enemies being able to take out a group of enemies, they're also a handy way to deal a lot of damage to sub-bosses in a single shot. Timing is key though, so you want to make sure to pay attention to how quickly they flash red in order to know precisely when to toss them to do the most damage possible.

GFR uses a 16-bit inspired art style, but with a blend of 32-bit level coloring and detail to create something that goes beyond what could have been done on something like a Super Nintendo or Sega Genesis and would've been right at home with the Neo-Geo. Enemies are varied and show off more imagination than most 2D platformers - which tend to have a handful of stock enemies. Here, you do have that happen for a certain stage theme - but after a set of levels is done, you get a whole new army of foes to face.

There's a bit of puzzle solving required at times too as some enemies require you to take out a shield first, or take a limb away before they can be defeated. You also have to do things like chase after enemies and take them down with smaller ones, all the while battling a timer of sorts as the enemies can't leave the stage before being blown up. Grapple Force Rena is available now for both Linux and Windows devices. It's made to run on pretty much anything created in the last decade - so even if you have the cheapest possible computer on the market right now, you should be able to at least runt he game. It only requires 512 MB of RAM, which is unreal and features full controller support alongside keyboard and mouse controls by default.