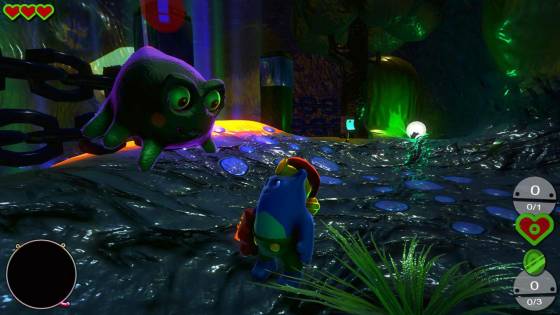 Linux gamers don't have a ton of 3D platforming options, but a new company is set to release a brand-new 3D platformer very soon. Origamihero Games has released a single 2D platformer so far, and now they're entering a new world with Heart Chain Kitty. The in-game world is a continuation of the dev's freeware Game With a Kitty series and sees a world falling apart at the seams. The world is coming to an end, and Kittey needs to find his parents while also being a large blue fur blob. While some platformers have you collecting stars and others jigsaw puzzle pieces, Kittey's adventure sees him collect giant power hearts.

Beyond regular running and jumping, you have a wide variety of power-ups to traverse the world. You can jump on bubbles to move around quickly or even hop into a bubble and run around the world ala Super Monkey Ball. Those sections test your precision platforming skills, while world-rotation puzzles test your ability to stay safe with everything around you shifting.  Rockets can also be ridden in quick little racing sections while jump pads allow you to soar to new heights. There are quite a few puzzle sections too and they use a more static perspective to make it easier to solve the puzzles.

The world itself looks stunning -, especially for an indie game. There is a ton of color everywhere, with some Tim Burton-esque bizarre color choices. One section has you jumping around blue walls with yellow windows visible that you need to jump around. Even the bottle rocket racing sections give you something to be amazed by as you can dart around neon-infused floors with spikes on them, while the speed shoes turn you into Sonic in an area with a blue floor and bright green skies. The color choices definitely change up the platforming norm - so instead of The Snow Area and The Grassland Area, you get some crazy worlds that defy traditional description.

Of course, boss battles are a bit part of things and you will battle some screen-filling foes during your time. The game also features some side-scrolling platforming sections - making it a merger of 2D and 3D platforming in a way that is rarely done. Super Mario Odyssey had some 2D sections, but they were more homages to the past than proper platforming sections with a modern twist on them. Heart Chain's 2D sections have you solving minor puzzles while finding your way through the section.

The game features a unique voxel look for parts of the world and a wide variety of hidden sections. Kittey can find a lot of areas to find secret hearts and also unlock hidden quests and full stages. There's a bit of a skill chain system in place too with strengthening cakes and you can boost your health too. There is a lot to do in Heart Chain Kitty, and it looks like a fun romp for 3D platforming fans. Kittey's first 3D adventure hits Linux, Windows, and Mac OS X on November 23 and it has full controller support.