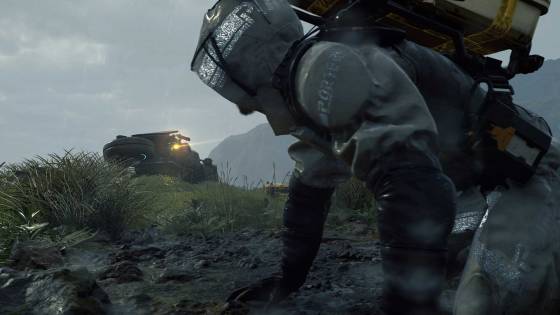 It's time for the monthly 'What's Going on With Death Stranding?' post! I kid, but it seems like new info trickles out about the game every month or so, doesn't it? The discussion around Hideo Kojima's in-development sci-fi action/adventure game has been a hot one lately, kicked off by a few key events surrounding the past few days. As it turns out, Kojima took a trip to Amsterdam to see none other than the good folks over at Guerrilla Games, known best for their work on 2017's Horizon Zero Dawn and the FPS series 'Killzone'. His reason for the trip? To showcase the first two hours of the game in private for Guerrilla, getting their impressions and feedback. Those who are familiar with what's under Death Stranding's hood may not be surprised by this; after all, the game is running on Guerrilla's very own Decima Engine that was used to power Horizon Zero Dawn. Early on, Kojima took a similar trip to Amsterdam and made the decision to utilize that engine for his new game.

This has naturally led to a sort of friendship forming between Guerrilla Games and Kojima's newfound studio: Kojima Productions. Since the recent meeting was behind closed doors and kept hush hush, we aren't allowed to know what exactly Guerrilla got to see. The good news is that if Kojima is able to confidently show off the starting hours of the game in playable form, its development is likely proceeding quite smoothly. All of this has led everyone to ask the big question: Will we see Death Stranding in 2019? It's hard to say, especially with publisher Sony opting to duck out of E3 this year, but there have been some recent hints that fuel this fire. Just the other day, notable video game voice actor Troy Baker put out a coy tweet on his official Twitter. The tweet in question shows a side by side picture of Snow from Final Fantasy XIII (whom he voiced), and Death Stranding's mysterious antagonist in a golden skull mask (whom he also will voice). "2009vs2019...?" Baker stated. He didn't elaborate any further on that hinting. While it's not straight from KojiPro themselves, that tweet certainly suggests we may see it in 2019 after all.

Death Stranding is sort of like the video game industry's biggest mystery right now. Most of what we know about it comes from the game's numerous mind-boggling trailers that have been presented at shows like E3 and The Game Awards alike. Kojima describes it as an action game, one that has an expansive open world and utilizes a unique form of multiplayer alongside its single-player. If you played Horizon Zero Dawn, you'll know that the Decima Engine is capable of crafting an impressive open world landscape. Death Stranding's world is a lot more bleak than HZD's, however, going for a dark sci-fi approach in a world filled with mysterious, invisible entities and rain that ages people. The star of the story is Sam Porter Bridges, the protagonist of Death Stranding voiced and motion captured by TWD actor Norman Reedus. Reedus and movie director Guillermo del Toro hopped right onboard the project after Kojima's 2015 falling out with Konami, and subsequent cancellation of Silent Hills (which Reedus was also going to star in).

Death Stranding will release... well, eventually! And when it does, it will be available exclusively on PlayStation 4. The closest thing we've seen to actual gameplay was the trailer played at Sony's E3 showcase last year, which demonstrated Sam walking around the game's beautiful environments and sneaking around horrifying monsters. You can view that trailer down below here. Kojima Productions head of marketing Aki Saito was quick to clarify in a tweet following the recent private meeting that "the game is not fully completed... yet". Make of that what you will, alongside everything else. What is for certain is that Death Stranding is an ambitious game, and seems like it will contain a lot of the hallmarks that have made Hideo Kojima such a notable developer for his work on the Metal Gear Solid series. Keep your eyes open for any further news on the game as 2019 continues forward.