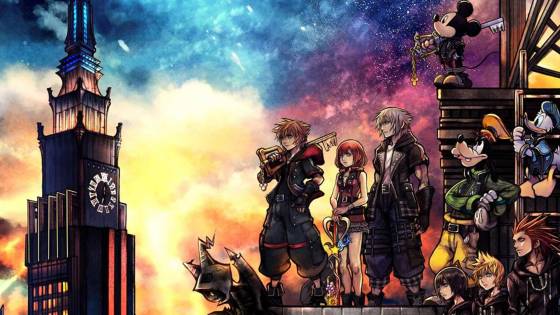 The Kingdom Hearts franchise is a love letter to those who love both Disney and Final Fantasy, all the while creating new characters, worlds, and more that ties it all together. The upcoming Kingdom Hearts III is set to be the end of the story for Sora and his friends, and as the January 2019 release date draws ever closer, more and more is revealed about the game. And now, we have the official box cover art for Kingdom Hearts III straight from Square Enix. The picture was revealed on Twitter, and it features a plethora of characters from the lauded history of the franchise.

First and foremost, the main trio of characters, Sora, Kairi, and Riku are all there. All of which have their unique Kingdom Hearts III looks. Kairi is even wielding the Keyblade that she got in Kingdom Hearts II. Riku isn't wielding his weapon, which is a callback to a previous trailer for the game where he left his own weapon on a beach for his "other self" to find should he need it. On the Disney side of things, Donald, Goofy, and King Mickey are all present as well. Interestingly enough, they are the only "group" that is somewhat separate. For while Donald and Goofy are right next to each other, Mickey is up on a separate ledge. This actually ties into the story of the franchise where King Mickey only shows up in certain sections, mainly in big climactic battles or moments. So it makes sense that he wouldn't be with Donald and Goofy at the start.

The big surprises though might just be the other seven characters that appear on the cover. First up is the trio of Axel, Roxas, and Xion. All of which are wearing their Organization XIII garb. Organization XIII was one of the main antagonist groups from Kingdom Hearts, debuting in Kingdom Hearts II. They are "Nobodies", or beings without hearts. Roxas was actually the Nobody to Sora. Axel was a loyal member of Organization XIII, and friend to Roxas, and in Kingdom Hearts Dream Drop Distance, came back as his regular self, Lea. Xion meanwhile was an artificial creature meant to be a clone of both Roxas and Sora, a "failsafe" of sorts in case the Organization couldn't use any of them. Her only canon appearance was in 358/2 Days on Nintendo DS.

Then, there's Aqua, Terra, and Ventus, who were the "origins" of the Keyblade via Kingdom Hearts Birth By Sleep. All three have deep connections to both Sora and Riku and were the catalysts for everything that happened in the saga. Ventus made an appearance in Dream Drop Distance, and Aqua is confirmed to return for Kingdom Hearts III.

Then, there's the final person on the cover, Namine. She was created when Sora and Kairi's heart merged at the beginning of Kingdom Hearts. She is gifted with special powers, which made her a key player in both Chain of Memories and Kingdom Hearts II, as well as 358/2 Days. She is the only person who is "alone" here, making you wonder what her role in the final battle will be.

With all these characters on the cover, it's clear that Square Enix wants to definitively show that this is the end of the journey for these characters. Kingdom Hearts III will arrive on PS4 and Xbox One on January 29th.