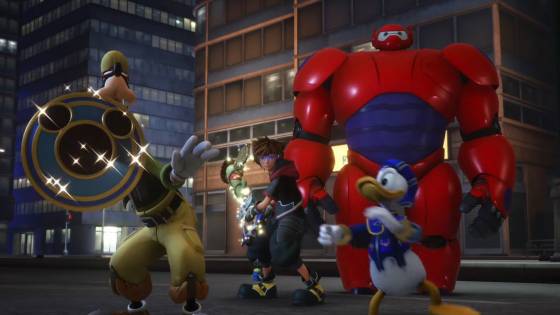 Kingdom Hearts has been a big focus of attention today, as Square Enix got busy announcing things for it at Sony's pre-Tokyo Game Show PlayStation Lineup Tour. For all Kingdom Hearts fans out there, I have one simple question for you: Do you want to swing around a keyblade in VR? With the announcement of the Kingdom Hearts: VR Experience, that's exactly what you'll be able to do. Well, kind of. The VR Experience isn't really a Kingdom Hearts game in VR, but rather, a collection of experiences and movies that you take part in and interact with. Alongside this news came a new trailer for Kingdom Hearts 3, adding to its already sizable collection of other trailers. Read on for more details!

As mentioned above, the Kingdom Hearts: VR Experience will be more of an interactable, movie-like game. Here's how Square Enix described it in their official post on the PlayStation Blog: "Kingdom Hearts fans can relive some of their favorite memories from the storied franchise with this special, immersive experience. This holiday, gather your friends and family to enjoy a free 10-minute interactive video featuring the series' iconic, breathtaking music." The developer went on to close their lips a little more tightly, not wanting to spoil what exactly the experience has in store for its fans. The good news is that as you keep playing it, you'll unlock additional new content. Some of the screenshots they shared seem to imply watching certain moments from the Kingdom Hearts series projected to you. Another screenshot even shows a player holding a keyblade from VR perspective. By this, it's clear this game will have some interesting surprises in store for Kingdom Hearts players.

The other juicy bit of Kingdom Hearts news is the Big Hero 6-focused trailer that dropped. While the introduction of Big Hero 6 is the big highlight, the trailer features brief snippets of footage from other worlds in the game too, alongside cutscenes of Nobodies and the new Organization XIII. It was confirmed long, long ago that Disney's Big Hero 6 would be a world in Kingdom Hearts 3, but this is the first time we actually get to see footage of it. While quite a few worlds have now been revealed and confirmed for KH3, there are likely still some that will remain surprises up until the game's release. The worlds this time around will be huge in comparison to the previous games, with director Tetsuya Nomura stating that one world in KH3 is "equivalent to one [previous] game, and the things to do for each world are vastly different".

The Kingdom Hearts: VR Experience will be launching sometime this holiday season exclusively on the PlayStation Store for PSVR. Good news is that it will be entirely free of charge, so any person with a VR headset who wants to check it out can do so. Kingdom Hearts 3 is slated for release on January 29th, 2019, starting the year off with a bang for RPG fans. It will be available on PlayStation 4 and, for the first time ever, Xbox One. If you want to get caught up on the series, the best way to do so is seeking out the 1.5 + 2.5 HD Collection for PS4, as it compiles almost every KH game in one package. That just leaves the 2.8 Collection, which is also vital to the story. You can view the new KH3 trailer below, but keep in mind it's only available in Japanese for now. For more information on the VR Experience, check the PlayStation Blog for official word from Square themselves!