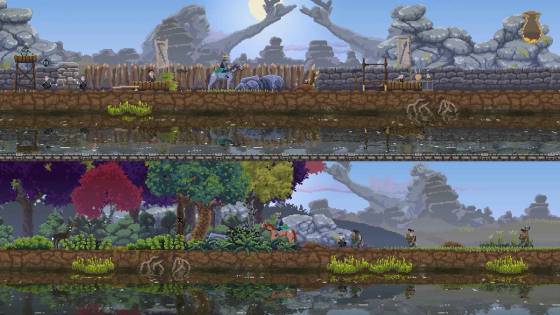 The Kingdom series has been around for a while and supplied players with the skills needed to run a kingdom and defend it. Blending in strategy with simulation and a touch of tower defense, its unique gameplay has stood out from the pack. The most recent entry, Kingdom Two Crowns, was just released on PC - but has just had Linux support confirmed for early next year. Two Crowns uses a highly-detailed pixel art style with gorgeous reflections for water and a realistic sky with a stark contrast visible between that level of detail and the more simplistic character models. It has a bit more action than most strategy games and is very user-friendly for newcomers.

Two Crowns mixes things up a bit by giving you a greater goal than before - toppling the Greed and winning the day. Doing so will require recruiting the right people and figuring out which unit types not only match your play style, but also allow you to develop new technologies faster. Beyond just figuring new weaponry, you can also advance your defenses at a faster clip and ensure a better present and future for your kingdom. Two Crowns allows you to play either solo or with a friend in local co-op to either rule on your own or with an ally to share in the glory. You can drop in or out at will during co-op play, which is great for those who want to just help a friend out briefly or simply try the game out and see if it's to their liking.

Two Crowns aims to be the definitive experience for both veterans and newcomers alike. An increase in emphasis on using technology against enemies allows you to find out which enemies are weak to what kind of attack. You can also use technology to upgrade your troop units, your kingdom as a whole, or weaken enemies during battle. Planning is key, so having a solid mix of technology and troop deployment will be important and allow you to win more easily if you're studious. The campaign mode is set to be the best offered up yet, with the ability to create multiple kingdoms over time to stop your rivals. There are going to be a variety of different themes released over time for the stages too, with the earliest ones involving the feudal era of Japan alongside a more traditional fantasy kingdom.

Kingdom Two Crowns is available now for $19.99 via Steam and is playable on Linux with Proton - and it doesn't appear to suffer from any known issues right now. The devs have announced that native Linux support is planned and should make it into the game's first quality of life update in 2019 - alongside a slew of other improvements. Improvements will be made for the winter season, while ninjas will be more versatile and it will be easier to recover lost money over time. New challenge islands will also be added to reduce your kingdom size, but increase your challenge level and test your mental mettle if you want to survive. New fixes will be added for various troop types attacking different parts of the in-game world too. So far, this looks like an outstanding entry in the series and a must-buy for series vets – while newcomers will want to at least try it out with a friend via co-op.