Kirby Is The Last Surviving Fighter In The 'World Of Light Mode' For Super Smash Bros. Ult... 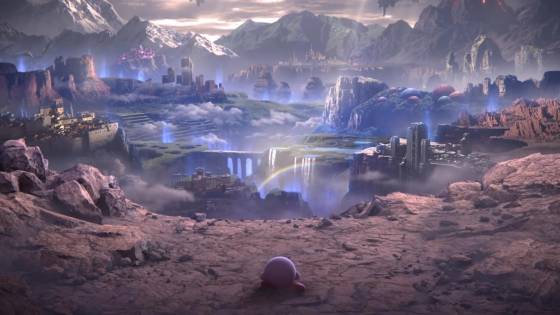 Super Smash Bros Ultimate is set to be one of the biggest games not only on the Nintendo Switch but in all of Smash Bros history. For not only will it have 80 fighters when all is said and done, but it will also have the "Spirits" Mode and the Adventure Mode called "World of Light". World of Light is interesting for many reasons. For it takes inspiration from the Brawl Adventure Mode Subspace Emissary, but it just as quickly turned everything on its head when it "killed" the entire Smash Bros Ultimate roster...all except Kirby that is.

In the trailer for World of Light (which has been likened to Avengers: Infinity War in many respects), the united front of Smash Bros characters stand up to a seraph-like entity named Galeem, who was surrounded by an army of Master Hands. Galeem gathered up their energy and shot massive beams of light at the Smash Bros characters, "killing" them instantly. All except Kirby, who hoped onto his Warp Star and got away just in time, then returned once the carnage was over.

Since the trailer, many have speculated as to why Kirby was the only one to survive the massacre. Some speculated that it was because Kirby was Masahiro Sakurai's first creation with Nintendo, and he wasn't going to "kill his baby". Others looked towards canon to see why Kirby survived, and thus surmised that because Kirby's Warp Star is faster than light (which is what the beams were made of), he could've escaped, unlike the others who at best could shield themselves or teleport away.

But, during a massive press conference detailing Super Smash Bros Ultimate, Nintendo revealed that there is actually another reason that Kirby survived, and we will have to play World of Light to find out what it is.

Not telling gamers right now is actually a good way to ensure that World of Light gets played, not that it needed the help. The trailer alone was enough to get people interested in it, and now that we're mere weeks away from the game releasing, it's evident that players are going to do so.

To their credit though, World of Light is more than just an adventure mode, it's one where you can set your own path, and then unlock characters along the way. As such, you won't be playing as just Kirby throughout. Some have even reported that unlocking the characters in Super Smash Bros Ultimate is actually tied to World of Light, making it all the better to play it.

The questions will no doubt continue to mount, just who is Galeem? Why did the Master Hands serve him? And what really happened on that day? We'll find out when Super Smash Bros Ultimate arrives on December 7th.