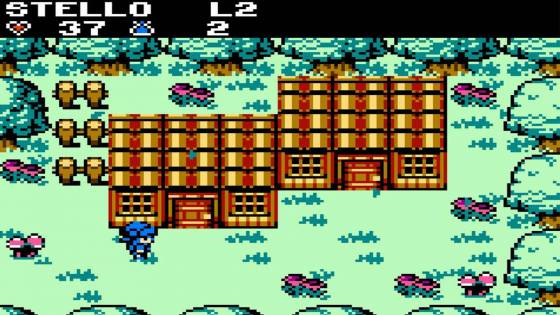 Knights of Tartarus is a throwback JRPG - but one that still manages to stand out from the pack. Retro-inspired RPG have been an in-thing with the rise of mobile gaming alongside indie gaming. The former generally uses RPG tropes in ways that have been done to death but presents them in a few unique wrappers. Kemco is especially fond of this and has made many RPGs that hit the notes of the genre without leaving a lasting impression. On the PC side of things, RPG Maker has become the go-to way to create an indie JRPG in the modern era.

Unlike many indie RPGs, Knights of Tartarus is made in Unity and offers up not only a completely different look with its highly-detailed 8-bit look but also the ability to customize your character. While a game using an 8-bit style may seem hard to add nuance too, KoT uses a Phantasy Star approach of using a lot of color depth within the world itself. The end result is something that would be right at home as a latter-day NES game with things like roofs having detailed shingles, or statues showing meticulous details so you can tell them apart. Wood panels also show cracks, while small bodies of water ripple and show depth. In terms of its graphics, the game definitely shows that putting self-imposed limits on a game can really work out to its benefit.

It's a turn-based RPG that uses scaling difficulty - so there isn't a need for grinding. Despite its old-school look, it does feature modern RPG flourishes like skill trees to make you more powerful with new abilities. Exploring the world is rewarded with new weapons and gear to make your journey more enjoyable on the whole. The goal of the game is to topple the two titular Knights of Tartarus, and the game's development has been helped with community involvement allowing for quick fixes and improvements for the end user. It's rare that we see developers take such an active role and it should make this game better in the long run. The game has received some updates recently to smooth out some of its rough edges and improve the experience.

The game has been in early access for quite some time now but hasn't had a sale until now. Until November 20, you can get the game at a 15% discount - taking it to $8.49. Fortunately, if you miss out on this deal or just want to buy it for full price to support the developers, you can buy it for only $9.99 anyway. The game's development is far ahead of schedule - which is great news for those wanting to play the full adventure. Instead of its March 2019 planned release date, it looks like the full game will be ready by January at the latest with a mid-December timeframe being possible as well. The game is available via Steam for both Linux and Windows and offers Linux users a relatively rare taste of a highly-polished 8-bit-style JRPG.