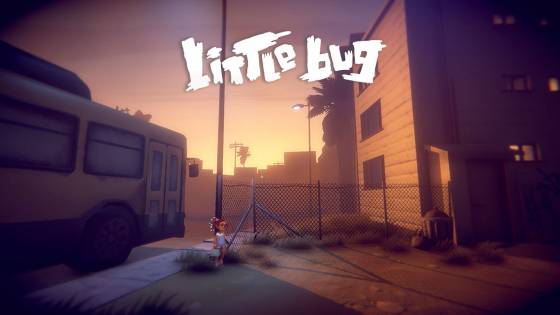 Puzzle-platformers have risen in popularity quite a bit over the past decade, with games like Braid opening up the genre to new players. While that game featured a lush 2D art style, Little Bug goes for a highly-stylized and detailed realistic-looking style. It's very reminiscent of INSIDE - only with a twist. Instead of controlling one character at a time, you control two. Nyah is a young girl walking home from school when she is suddenly sent into a bizarre world full of bottomless pits, deserts, and icy caves. She uses not only her own wits but also her spirit helper to figure out what's going on and hopefully find her way home.

Her spirit has the ability to move her through the world - so if you want to use it to swing across a large gap ala Bionic Commando, you can. However, you will also need it to solve puzzles and move her from Point A to B safely. Doing so properly allows the in-game world to shift around a bit and move her to where she needs to be if the circumstances allow it. Her adventure features a slew of treasures to uncover too. Some hold great sentimental value to Nyah, while others are just small trinkets that add to the world. Another type can be found that will unlock special challenge levels - a bit like the Time Rift stages in A Hat in Time, where every skill you have learned up to that point will be tested.

The in-game world itself is quite lush - with a lot of detail in every part of the environment. It's impressive to see something like a night cityscape lit up by giant neon hands that at one point serve as a part of the environment and then later serve as obstacles to be avoided. Lighting is used effectively too, with just enough light being placed in the world to make the stages easy to navigate without losing the dark and gloomy feel. Moonlit deserts are also a joy, as you can see things like radio towers in the distance while the moon itself lights you adventure towards the center of the screen - forcing you to pay more attention to that area while also not being able to fully take your eyes off of the extreme left or right sides to make sure you see enemies.

You control both characters at once - each with a stick, evoking a bit of Brothers: A Tale of Two Sons, but with a darker overall look to the adventure. The game itself is fully-optimized for controller support across all platforms. The developers do ask that Linux users start the game with windowed mode checked to start, and a controller is recommended for everyone. MacOS users may have to download a third-party driver to make their controller of choice work, while Windows PC users will be able to use an Xbox One or similar controller with ease. Little Bug is available now on Steam or GOG.com for those who prefer a fully DRM-free experience.