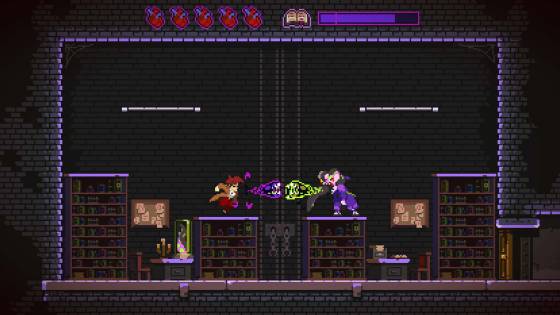 Metroidvanias have grown in popularity immensely with the rise of indie games, and a new one is set to come to life thanks to Kickstarter, It combines the sub-genre along with a cosmic horror twist as you explore a New England mansion. As KC Morgan, you're a paranormal investigator and fight the endless hordes who are infesting the mansion. You have to figure out exactly why they're there, and have to survive with your mental prowess and an old revolver. The deeper you get into the mansion, you find out more about what's going on in it.

Unlike many Kickstarter games, there is a fully playable demo available right alongside the Kickstarter launch. The demo showcases a fairly small part of the full world, but controls like a dream too. Even using a keyboard and not a controller, it's easy to move around and shoot enemies. The pacing is very deliberate, and it is a lot like the original Metroid in that sense. There's a boss fight in the demo too, so you do get a good sense for what your money is going towards.  Pricing is generous, with only $10 being needed to get a digital copy of the game and your name in the credits. Spending $15 gets you that plus beta access and the OST available via either Steam or Bandcamp. For $25, you get all of that pus a digital artbook and a copy of Earthtongue on Steam as well.

The game's environments stand out from the pack because they actually change as the adventure evolves - so when you earn a new power, you could not only resivist an area, but see it with new parts of the world forming as a result. It's a very non-linear game and encourages exploration, but it does so with a fairly easy learning curve. Your progress in things is self-directed and you can pick just about any path you want - with sequence breaking being a big part of the core game design. Everything is designed around being beaten in any order you can, so much like the original Legend of Zelda, you have a set gameplay style and one that can result in you finding high-powered items faster than you would normally expect.

The world itself is very dark and reminiscent of Symphony of the Night with its usage of gothic design and real-world places like libraries and caverns. It's a wee bit odd to see the hightly-detailed backgrounds clash to a degree with the more 16-bit styled characters, but the style works as a whole. The gunfire is surprisingly powerful, with each shot feeling like a hard blast and you can improve it as time goes on. So while you start with a single bullet, you can wind up with an upgrade that allows you to use a much more powerful monster blast instead. Finding new parts of the world lets you learn about the game's world and the history of the mansion and the family that has inhabited it and seemingly led to all of the monstrous goings-on. The game is set for a release on PC and Linux now thanks to it doubling its financial goals, and has great potential to be a top-shelf Metroidvania.