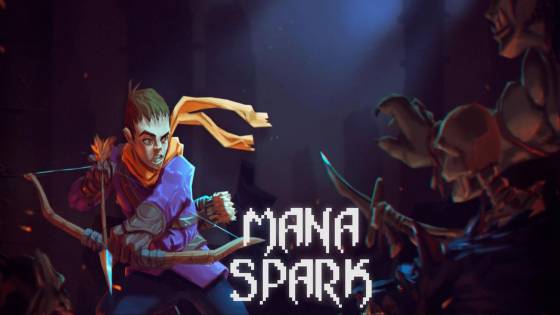 Mana Spark has finally been released - and the game's multi-year journey to completion has come to its immediate end. Inspired by games like The Binding of Isaac and Dark Souls, few games have found a way to merge both Souls-like combat and pixel art. Titan Quest was the first game to try such a thing and suffered from being a bit too hard even for the sub-genre. Player skill is of paramount importance, and trial and error will lead you down a path of success - eventually. As with any Souls-like, you have to pay attention to animation - both your own and those of your enemies to properly time your attacks and evade oncoming attacks. Pattern recognition is a huge part of staying alive and failing to pay proper attention will ensure your swift demise.

Combat is completely skill-based and each enemy has their own sets of skills and behaviors. Learning what they do best and avoiding it to then take advantage of their mistakes will be the key to success. Doing so allows you to help rebuild your guild's village. Unlike a lot of Souls-likes, this one does have a greater narrative and the more enemies you destroy, the better your chances are to mend the village brick-by-brick. Meeting new characters allows you to improve yourself with new weapons and traps. Having a new weapon may give you more power - but if it's slower to use, you have to figure out if it's worth the increased damage to change your timing around.

Your regular bow and arrow is reliable but won't do much damage with a single shot. Being able to dodge enemies will allow you to chain shots together, but enemies who team up you may wind up giving you nowhere safe to go. If you have one above you and you roll to the bottom, where another enemy is lurking, you're still vulnerable to attack. This may lead to one death, but enable you to learn how to avoid a dozen more. The big key to the game, much like in life, is to not let a single setback defeat you fully and to learn from your mistakes.

Mana Spark keeps things evergreen by using procedural generation to ensure that each new run you have is a new experience from beginning to end. Each room has been crafted by the game's engine to focus on the combat, and you will never be in the same dungeon twice. This means that learning an individual dungeon's layout is never something you have to worry about and allows you to avoid getting worn down by a single stage layout over time.

Mana Spark is now available on Linux, MacOS, and on PC via Steam for $9.99. It features full controller support alongside keyboard and mouse support - so those looking for a console-like experience can have one and enjoy the same experience as someone playing with a keyboard and mouse. It's also a very low spec game - only requiring 2 GB of RAM and 400 MB of space with minimal graphic card restrictions - so anyone with a computer made in the last five years should be able to enjoy it without a problem.