Mars Underground Gets a Free Demo Alongside Release Date Announcement 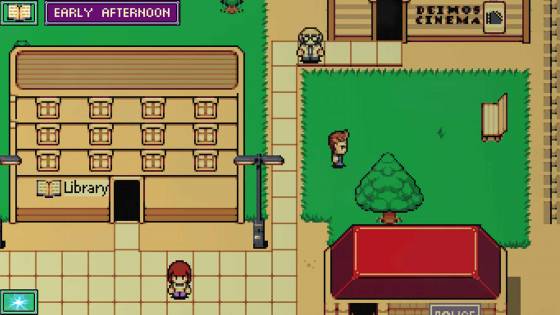 Mars Underground is Moloch Media's first game, and it shows incredible potential even before release. Like many others who grew up loving RPGs, the long-running Mother/Earthbound series is a source of inspiration for the game's tone. As a young man named Mars, it's your first match at a new school. However, every day in this school is the same day on repeat - a bit like Groundhog's Day. Every night after school ends, the world ends - resulting in you reliving the same day constantly. Mars Underground features a robust design that doesn't just have you go from point A to B, you can also solve mysteries within the world - such as why it keeps ending.

Each time the day ends, you will open up a new time cycle. With each new cycle, you get new items available alongside new topics within the world to uncover. This allows you to explore the game's many branching stories, which pay off with a wider variety of endings than most. It will mix an RPG with a more opened-up sandbox design. You can do just about anything you want - take experimental prescription medication, get hit by a car, or even humiliate yourself constantly. The end game here is to figure out what's going on in the world around you. By exploring the world around you, you can gain more insight into what's going on in the world around you.

The game sprang to life via Kickstarter over two years ago, and stands out from just about anything else on the market now. While some games like Undertale and Citizens of the Earth have been inspired by Earthbound, none have quite done their own thing with a quirky, realistic setting. Mars Underground looks different not only thanks to its sandbox style, but usage of characters to drive various sub-plots around. You can explore the world and find romance - something that isn't often done in a traditional RPG, or just choose not to. Either way, you can still work on the main story since that's all about solving the time problem and everything else is just gravy.

The cast of characters is pretty bizarre, and that's something that is retained from Earthbound as a whole. You have a math teacher named Mr. Zucchini who enjoys morning TV and has odd conspiracy theories that bewilder his students. The world itself feels fleshed out with things like a movie theater in the city showing various films throughout the day - giving the world a sense of progression akin to Shenmue to a very small degree. Restaurants are also available and allow you to try out a variety of food types - including the ever-popular meat shake and beefcake.

After two years, Mars Underground is finally set to be released in March of 2019. You can wishlist the game on Steam or enjoy a demo now via the Kickstarter page. If you like oddball RPGs in a real-world setting, it looks like a must buy and is playable on Linux, Windows, and MacOS.  It definitely looks to scratch the itch of longtime Earthbound fans and should be quite popular with that sub-set of RPG fans.