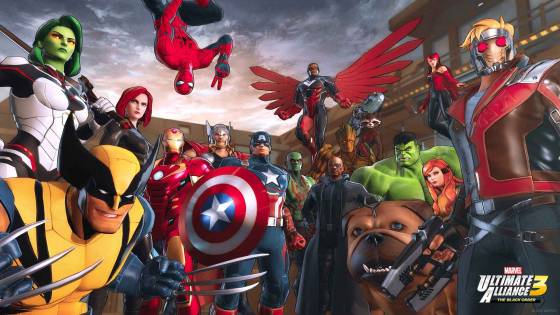 You could argue that it's never been a better time to be a Marvel fan. This week alone, Marvel has revealed trailers for Captain Marvel (set to release next year) and have officially debuted the trailer for Avengers 4: Endgame. But the news didn't stop there, for at The Game Awards, Marvel dropped one more shocker. For in a surprise world premiere, they debuted the first trailer for Marvel Ultimate Alliance 3: The Black Order. And in a reveal that no one saw coming, the game is going to be made exclusively for the Nintendo Switch.

For those who don't remember the original two games, Marvel Ultimate Alliance was an action-RPG title that brought together the Marvel Universe characters for a threat unlike any other. You would be able to pick and choose your team, and then customize their movesets and other abilities and level them up to be even stronger. The first game was a massive success, and the second one was known for the Civil War storyline and expanding upon it. But, after the release of the second one, the series wasn't expanded upon, until now that is.

Marvel Ultimate Alliance 3 is subtitled The Black Order, who are the servants of Thanos, and are a more recent edition to the comic book mythology via their role in Infinity, and then their return in Avengers: No Surrender. Not to mention they were so popular in the comics that the Russo Brothers made sure that they were included in Avengers: Infinity War.

However, the game promises a lot more than just the Black Order to fight. For the reveal trailer also showed enemies like the Sentinels, Sandman from the Spider-Man universe, Ultron, a new mystery villain, and of course, Thanos. And given the scale and scope of these games, it's fair to say that many, MANY more villains are going to be in the mix.

But it's not just the villains that are getting expanded here. For Marvel Ultimate Alliance 3 is bringing in even more heroes from the Marvel Universe, including the in-game debut (for this franchise anyway) of the Guardians of the Galaxy. All five members will be playable (with Rocket and Groot being one characters apparently), and there are likely even more surprises and character reveals along the way.

Speaking of surprises, it's no doubt shocking that the game is going to be exclusive to the Nintendo Switch. For this kind of exclusivity has never happened on the series before. Mike Jones, Vice President & Executive Producer, Marvel Games had this to say about that:

“MARVEL ULTIMATE ALLIANCE is all about teaming up with your friends and creating your own ‘dream team’ of Super Heroes to go on adventures across the Marvel Universe, and Nintendo Switch is perfect for delivering on that promise of cooperative gameplay and shared experiences.”

This is indeed a big "get" for Nintendo, for having Marvel make an exclusive game for them could be the beginning of something big. The game is scheduled to release in 2019.