Neon Chrome Updated for Linux on GOG and Steam 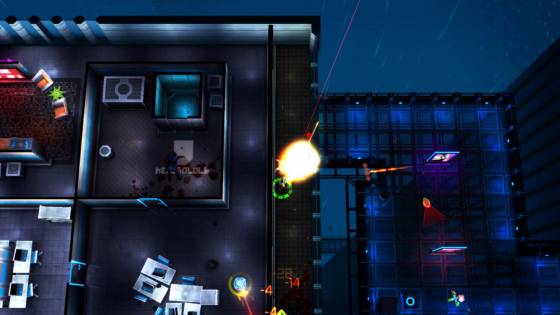 Since April of 2016, Neon Chrome has been providing a blend of cyberpunk, shooting, and procedural generation. Ever since Hotline Miami, highly-stylized twin-stick shooters have been in high demand - with a variety of games putting their own spin on this sub-genre. Games like Time Recoil took the overhead viewpoint and combined it with a unique concept - like a spy thriller blended with time travel in that instance.

Neon Chrome stands out with a much faster pace than any of those games, while still combining the ability to need to avoid damage and carefully timing everything to where you shoot first and ask questions later. Death is something you want to avoid, but not the end of the world. Here, death leads to the ability to try the world out in a new way thanks to its procedural generation. This means that while the game does lack a finely-tuned level structure, you do wind up with a completely different play experience every time out.

Having something with infinite replay value is nice, and the game's snappier pace means that players who want a quick adrenaline rush will get it. One issue that both Time Recoil and  the Hotline  Miami games had is that they look like they're faster-paced games than they actually are, and can be a bit too twitchy as a result. Neon Chrome keeps the pace fast for the most part, and only slows things down when you've flattened most of your enemies. You can do so with rapid fire machine guns, a more focused pistol that won't do damage as quickly, but is easier to aim, or with things like rocket launchers. With something like a rocket launcher, you want to make sure to aim at a wall first and only fire when an enemy is near the wall so you can not only take out the wall, but the enemy alongside it.

That kind of attack pattern allows you to blend in strategy with a more frantic pace, and makes Neon Chrome one of the finest twin stick shooters on the market today. Regular updates have fine-tuned the control as well and those looking to enjoy it on any computing platform will be able to enjoy full controller support. A recent update just allowed the game to go live there after years of being playable on Windows and Mac OS X, so now anyone can enjoy this fast-paced adventure.

It's a rewarding game too, with a constant progression system tied to how well you do in the game that allows you to improve your health and damage output alongside things like gaining new weapons for a loadout or adding some cybernetic upgrades to your character to buff damage. Those wanting it on Steam can get it for $14.99, while those wanting the deluxe edition with all of the DLC - including the more focused Arena mode, can get it for $7.97. In a cool move, the DRM-free GOG.com version is also on sale for about the same price – allowing you to enjoy it without any kind of online connectivity or DRM that can get in the way of enjoying the core game.