Obsidian's New Game, The Outer Worlds, is an Old-School RPG in Space 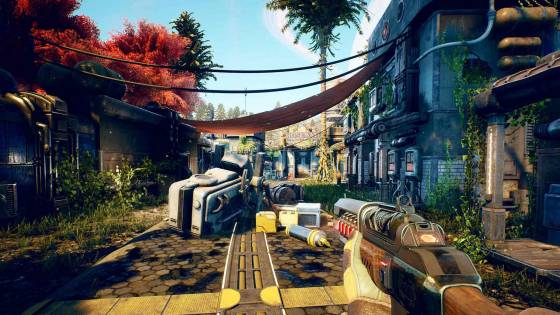 A few nights ago, The Game Awards 2018 streamed live to people around the world. It was a night full of awards for 2018's best and brightest, but also a night for surprise reveals and game debuts. One such reveal came about from the guys over at Obsidian Entertainment, the team behind games like Fallout: New Vegas and Star Wars: KOTOR II. Their appearance at the show was rumored for a little while there before it actually began, and people were excited to see what new game they had in store. The trailer they presented showed us a game called The Outer Worlds, and it seems to wear its inspirations on its sleeve. Many comparisons have already been drawn to Fallout: New Vegas, and the game's co-director, Leonard Boyarsky, had this to say about that: "I don't want to necessarily make comparisons between the two, but they're both from the same DNA. Let's put it that way."

The Outer Worlds takes place in a sci-fi future, where corporations from all over have invested in a new colony out there in space. You were one of the travelers to this colony but have been frozen in cryogenic sleep longer than expected. Thawed out by an eccentric looking scientist (seen in the trailer), he tasks you with helping him thaw out the other settlers in need of similar help. This being an Obsidian game, the choice is yours on what to do. You could help the scientist and be a good guy, but you could also choose to turn your back on him and help out the shady government corporations instead. "You can effectively play the game any way you choose," said Boyarsky. "You can be the hero. You can be anti-hero. You can be a full-on mercenary. You can be a psychopathic killer."

The game is a first-person shooter and looks like a refreshing blend of New Vegas and Mass Effect. A large part of the gameplay comes down to your character customization options and how you develop them over the course of the story. You'll be effectively playing as a silent protagonist, and as you get stronger, you can develop their perks and attributes as you see fit. Obsidian even went a step further and added in a 'flaw' system, so that your character would develop reactionary flaws depending on how you play the game. For example, fighting a lot of robots? You might get a perk presented to you, which you can take if you add on the flaw of Robo-phobia which decreases all your stats around robotic enemies. Things like that are thrown in to make The Outer Worlds feel more dynamic and immersive, and it looks like a joy for RPG fans everywhere.

Earlier this year, Obsidian Entertainment joined the many studios that were bought by Microsoft. Considering their earlier financial troubles, this couldn't have come at a better time. Even with the acquisition, they still plan to release the game to PlayStation. Once out, The Outer Worlds will be available on Xbox One, PS4, and Windows PC. Publishing the game is Private Division, a new label under Take-Two Interactive Software. Many have pointed out that the game's announcement couldn't have come at a better time, debuting shortly after Bethesda's Fallout 76. If you want to get a look at The Outer World's mischievous humor and fun gameplay for yourself, don't forget to watch The Game Awards trailer for it just below. We have no solid date on the project just yet, but the trailer puts out a 2019 release window for the time being. Considering the footage, it looks far enough along that this might be feasible.