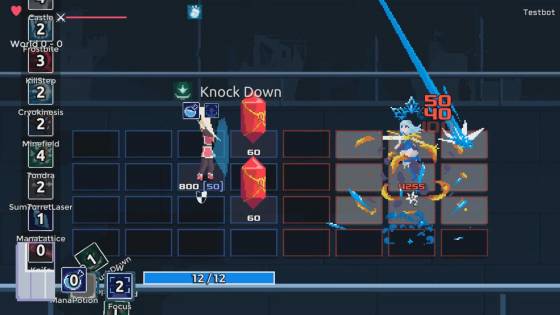 One Step From Eden sprang to life from a desire to see a return to the beloved Mega Man Battle Network style of RPG. What started as a portable side game for the Mega Man franchise become one of the Game Boy Advance's most-revered franchises - and resulted in some of the legendary character's best-reviewed games from that time period. With its RPG roots and a bit of card-battling blended in with chips, it stood out from everything else not only in that series, but on the market at the time. Eden offers up a very similar side viewpoint and action, but changes things up as well.

Beyond going with a full-fledged card battling game inside the action RPG-esque shell, you also get a rogue-like element added in as well. While a Battle Network-style game may not seem to work out with a card battling mechanic in theory, it does work out nicely in the demo and encourages you to pay close attention to the cards you use. A new co-op mechanic also allows Battle Network veterans to have something new to sink their teeth into, as multi-player action adds another element of challenge to the equation. The game allows you to craft new decks from over 200 spells and uses a variety of elemental properties for buffs as well. If you want, you can even combine them with status effects like poison and various range effects to make a truly killer deck.

If you want to take out three rows of enemies quickly with a single card, give it a shot with something that will attack all rows at once. If you're facing a boss, then concentrating your cards on a single foe isn't a bad idea as it allows you to focus in on the one enemy you truly need to take out. The pacing of the battlefield is insane, with a bit of bullet hell blended in with things like blasters and sword slashes that would be right at home in a Mega Man game. Eden's visual design is definitely influenced by the 16-bit era to some degree, but with a level of speed you couldn't get on hardware at that time except for maybe the Neo-Geo, and using a simplified pixel art style that still allows for incredibly-detailed models with minimal colors.

A demo for the game is up on Gamejolt and is regularly updated – offering a taste of what the full game has to offer. It's a beefy demo too - showing you the ropes of the core gameplay while also offering up over 100 spells and items and three boss fights in its randomly generated world. The full game is set for release this October for Linux, Windows, and Mac. Fittingly for a game inspired by a GBA classic, it will also come to the Nintendo Switch and allow for Battle Network-style action on the go in 2020. One Step From Eden reached an incredible 460% of its Kickstarter goal - making it a surefire release on all hopeful platforms.