One Year Later, The Astronauts Reveal More About Their Gothic Shooter 'Witchfire' 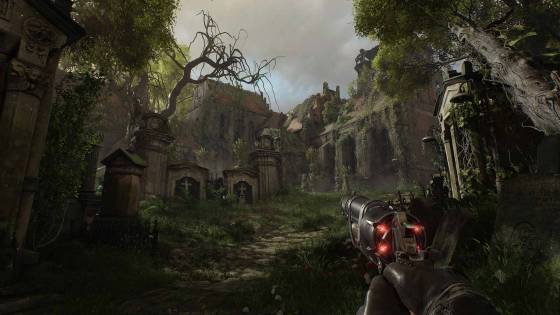 If I say the name 'Witchfire', it might sound familiar to you, though you may not know why. That's because it was a game that debuted with a teaser trailer last year during The Game Awards 2017, and the team behind it has made nary-a-peep about the project since. Fast forward a year later to now. As it turns out, the developers over at The Astronauts have been hard at work on Witchfire, and now, they're ready to break the silence and reveal more about it all. In a detailed blog post put out on their official website, team member Adrian Chmielarz discusses multiple things, including what kind of game Witchfire will be, how progress is shaping up, and why it took them so long to say anything about it.

But first, I think one of the bigger questions on everybody's minds is what is the story behind Witchfire? What sort of game is this? The Game Awards 2017 teaser trailer gave us a few ideas to start with: It's made by the developers of The Vanishing of Ethan Carter. Rather than go with the combat-free exploration gameplay of that title, the teaser surprised all with its gritty, gothic appearance and first-person shooter gameplay. The blog post expands on that footage more. Apparently, the game is set during the European witch hunts of the 15th century. Witches are real in the world of Witchfire, and it's up to the Church to put a stop to them. You play as one such member of the Church. "That's the core idea behind the game," the post reads. "Even if things are not as black-and-white as one might think." The hunt for witches is done through the framework of an FPS, with a hard narrative taking a backseat. The post explains that there's lore to discover as you explore, and that the storytelling is done entirely through that with no cutscenes. They want the shooter to be more focused on challenge and mastery.

Cryptically, The Astronauts state that the 'heart of the game' is somewhere else, though that's something they'll expand on at a later date. That brings us to the question of the year-long wait; why the silence? According to them, it's simply because they've been hard at work developing the game, and that nothing dramatic has happened yet. The team is a small one, comprised of only eight people, though those people have a colorful history with games like Ethan Carter and People Can Fly's chaotic shooter Bulletstorm. In essence, Witchfire looks to be combining the atmosphere of the former with the gunplay of the latter. It's all being developed on Epic's Unreal Engine 4, and a lot of the assets have already been created, including guns (though their animations still need worked on). Levels are being meshed, and work is being finished on the AI that governs the enemy behavior. All in all, it's shaping together nicely, with the developers even providing high quality GIFs of gameplay on the blog post to show it off.

You might expect the game to be far enough along to come out in 2019, but The Astronauts think differently. They didn't elaborate much on this front, but stated that a 2020 release "sounds reasonable". Games take a while to make, and if the wait till 2020 allows them to polish up Witchfire to the best game it can be, I'm all for it. Because of how early everything is, no platforms have been outright confirmed yet, except for Windows PC. On the bright side, the blog post finishes by announcing daily updates every Wednesday from now on. "Whatever you want to call it, every Wednesday we will reveal something new about the game, show behind the scenes stuff showing how games are made, or explain the design ideas," the post elaborates. "For example, we will talk why it took us a day to have a functional gun, but three months to have a great feeling one." If you follow the devs on Twitter or Facebook, they'll notify you of these updates over there as they come out. For the full rundown, make sure to check out the blog post, or watch the game's sole trailer below.