Only A Month Later And Octopath Traveler Sales Continue To Climb 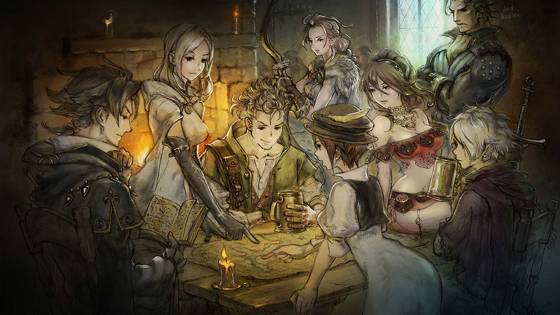 The success of the Nintendo Switch has been a well-documented thing. But one of the biggest factors in the console's success is that the game has been getting some pretty big support from 3rd party developers and publishers. And the ones that are exclusive to the Nintendo Switch always seem to sell well. Capcom had Super Street Fighter II: The Final Challengers, Ubisoft had Mario + Rabbids Kingdom Battle, Koei Tecmo had Fire Emblem Warriors, and now, Square Enix can say Octopath Traveler has sold 1 million units on the system.

For those who don't know, Octopath Traveler is a JRPG that was made by many of the same people who made the Bravely Default and Bravely Second titles on 3DS, both of which were big hits on the system. The team, now called Acquire, worked to make Octopath Traveler not just the next great Switch game, but one that both invoked the feelings of classic JRPGs like the first six Final Fantasy titles, but also transcended them with improved background graphics and effects via the Unreal Engine 4.

Clearly, they succeeded. For mere days after Octopath Traveler launched in Japan, it sold out, and it sold out again merely a week later. In the United States, Amazon was having trouble keeping the game stocked, which proved that the game was in high demand. It also should be noted that at the time of this posting, and on the same day the announcement was made, it's only been 3 weeks since the games' launch. Which as many online have noted is an impressive feat.

After all, JRPGs are considered a "niche" franchise, and even modern ones like Final Fantasy XV play by much different rules than the classic version of the game that Octopath Traveler is calling back to.

Many also feel that one of the reasons for its success were the two demos that came out this year and late last year that helped show gamers what to expect. In fact, the first demo was actually used to get feedback from gamers to help improve the game, and a lot of their changes were shown in the second demo.

Octopath Traveler now joins a short list of major 3rd games that have sold a million units on Nintendo Switch, a list that includes Fire Emblem Warriors, Mario + Rabbids Kingdom Battle, and a select few others. This is not only significant, but it guarantees that Acquire will be making more games for the Nintendo Switch.

The team noted in an interview before release that they love the system, and that they want to continue making games for it, but it would all depend on how well the game sold. With 1 million units being sold in 3 weeks, and likely more sales to come as time goes on, the game is a success in every sense of the world.

The only question now is, "What's next?" Gamers have an idea. If you look at the art that was given in the tweet that made the announcement, you'll see that the characters of Octopath Traveler are lined up in a unique way. Many note that it looks like a character from Bravely Default. So maybe they're going to make a third game in the series and bring it to Switch?