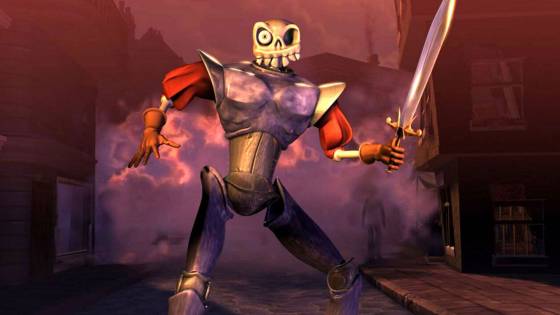 Sony has been hard at work remaking and remastering its classic titles for modern day audiences. This really grew with the release of the Crash Bandicoot N'Sane Trilogy, which saw great sales and reception from everyone around. Next up is, of course, the Spyro Reignited Trilogy. Currently, in development by Toys for Bob, we'll see that fly out on November 13th. But what about MediEvil? Where's the love for that? Back during the PlayStation Experience 2017, it was confirmed by Sony that a remaster was indeed in the works for PlayStation 4. No details were given outside of a teaser trailer that revealed it would be remastered in 4K resolution for your 'skelevision'. Even though the end of the teaser said to expect more info soon, Sony has been strangely silent about the project until now, leading many to wonder if it would ever see the light of day. On the recent PlayStation Blogcast, Sony social media director Sid Shuman confirmed we'll be hearing more soon.

"I have it on excellent authority that one [Sony Interactive Entertainment Worldwide Studios chairman] Shawn Layden is going to be stopping back on the show in the next week or two," Shuman said. "He's very excited to give everybody a big update on MediEvil." Probably one of the most important things Layden may be revealing is whether or not this MediEvil will be a remake or a remaster. While the original trailer specified 'remastered', the length of time it's taken for this news has led many to believe it's a full-on remake of the classic PS1 title. MediEvil has already gotten a pseudo-remaster in the form of MediEvil: Resurrection on the PSP, a game that went over... less than positively with fans. Since Sony confirmed earlier this year that they will be skipping out on a PlayStation Experience event for 2018, our exciting news will have to come from the PlayStation Blogcast.

MediEvil was a neat little 3D adventure/hack-n-slash video game for the PlayStation 1, originally released in late 1998. The games have you playing as reanimated skeleton Sir Daniel Fortesque, a knight from the medieval ages who comes back to prove himself once more and defeat the evil sorcerer Zarok and his undead army. While the game looks fittingly spooky, it actually sported a very tongue-in-cheek sense of humor and addictively fun gameplay. Considering the timing of Layden's announcement in the coming weeks, it'll be right around or just after Halloween when we hear more about the title. MediEvil went on to receive a sequel in 2000, simply titled MediEvil 2, on the original PlayStation. If this first remake/master does well, we might see that one get the same treatment. Thankfully, it ended up being a lot stronger of a title than Resurrection, which was the last we had of the series since 2005.

For now, all we can do is wait for that new episode of the PlayStation Blogcast to see what's been going on with MediEvil. Whenever the game does come out, it will be available exclusively on PlayStation 4, spooky scary skeletons and all. For the episode of the Blogcast, this was discussed on, you can give that a listen over on the PlayStation Blog. Other games discussed on this week's Halloween-themed episode include the upcoming Red Dead Redemption 2, Borderlands 2 VR, Evasion for PS VR, Astro Bot Rescue Mission, and Dream Daddy. Don't forget to also check out MediEvil's PSX 2017 trailer below here. It's not much to go on, but it's all we currently have to see of this project while we wait for more. Once the game is out, hopefully, it can bring MediEvil to younger audiences who never got to play the PS1 original.