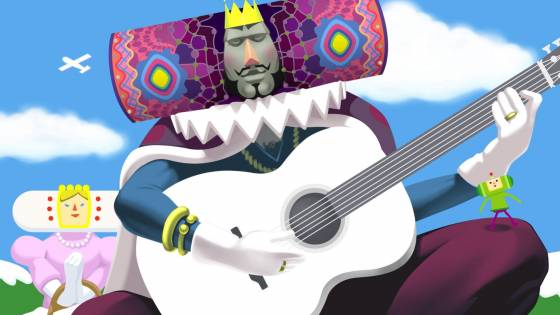 A few days ago, Nintendo finally got to hold their much-anticipated Nintendo Direct. As we reported, it got delayed due to the deadly earthquake that struck Hokkaido, Japan this past month. Due to the delay, some of the announcements did spring out earlier than was planned. Thankfully, a certain announcement about a rolling prince was a surprise for everyone watching. That's right: Katamari is back again! This time in the form of a remaster for the game that started it all, Katamari Damacy. While it may not be a new game, up to this point Katamari Damacy was only available exclusively on the PlayStation 2. It hasn't gotten any sort of re-release or ports to other platforms until now, so seeing such a classic finally being brought forward for new people to enjoy is heartening to see. Revealed via way of a trailer during the Direct, the remaster will also be on PC.

Katamari Damacy kicked the series debut off in 2004, right in the middle of the PS2/GameCube/Xbox console-era. Brought to us by Namco, it was a relatively strange game, to say the least. In Damacy, you play as a little alien named The Prince, the son of the majestic and bumbling King of All Cosmos. As it turns out, the King ends up drinking so much that he knocks all the stars out of the skies themselves, and leaves it up to The Prince to roll up things on planet Earth with his Katamari to make new stars. Gameplay has you going from timed mission to timed mission, where you must roll up your Katamari to a certain size within the allotted time. There will sometimes even be special missions where you have to roll up specific objects. As long as you don't think about how horrifying rolling up the entire Earth is, it's a pretty therapeutic and entertaining experience.

As of right now, it doesn't seem like too much will be changed in the remaster, which is going by the name of Katamari Damacy Reroll. The graphics will have the usual remaster improvements that are standard with most remasters these days, but there haven't been any additions to the game. Considering how wonderful the base game is already, that's not too big a deal. One of the new features exclusive to the Switch version, however, is the new gyro controls. As demonstrated in the Direct trailer for it, players can use both joy-cons to control the steering and movement of the Katamari instead of traditional controls (if they prefer). Additionally, fans can play co-op by using a single joy-con each. The HD rumble inside the joy-cons will be utilized as well. For those looking for a way to re-experience Damacy with a new control scheme, the Switch version may be the one to consider.

The Direct revealed that Katamari Damacy Reroll will be rolling out sometime this Winter before the year is up. The PC version will also come out at the same time. There hasn't been word yet on if the Switch version will be digital only or not. Reroll marks the first time a Katamari game has appeared on a Nintendo platform. If you haven't tried Katamari before, there's no better place to start than with the very first game, an entry many people consider to be one of the best in the series. For the full Katamari Damacy Reroll trailer that was shown during the Direct, you can view that below. Along with showing the new control options, we can get an idea of how the remastered graphics will look in action. With this alongside all the remaster announcements last week, it's been a good time for seeing previous console generation games being brought back in a new light.