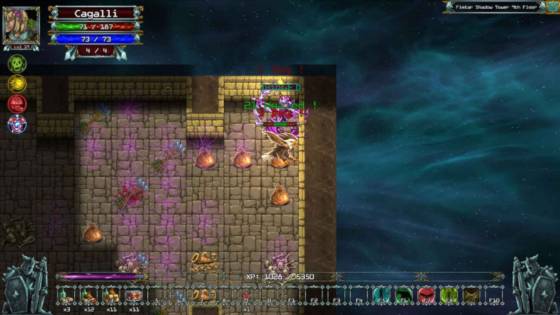 Overhead RPGs aren't exactly en vogue - but they can result in some of the most fun and challenging adventures out there. Games like Titan Quest have blended RPGs with Souls-esque gameplay, but nothing has quite blended a dungeon-crawler with a rogue-like until now. Rogue Empire is the first game from Portal Entertainment and merges those sub-genres together alongside tactical turn-based RPGs as well to form something that stands on its own.

The game's blend of turn-based RPG and card battling stands out too, but it takes more than a unique premise to create a worthwhile experience. Here, you have a wide variety of play styles thanks to different class types. You can either be offensive-minded, defensive, a heavy magic user, or a blend of them with a vairety of expertise levels amongst them. Generally speaking, being well-rounded is best and that allows you to learn about the core game mechanics. By being able to pick and choose different styles, you can find one that works best for you and then tinker with it a bit as time goes on.

Rogue Empire's random generation enables every dungeon to feel unique - so while you may encounter an underground pyramid-esque area, its layout will change each time you play it. This also means that things like traps and item doors will be different each time out. The benefit of this is that everything is kept new, but the downside to this can be that the worlds can lack a sense of flow. With random generation, it's easy for stages to feel like a hodge-podge of enemies and events.

Player classes are built up with cards - allowing you to have a thief that is great with sword attacks or a magic user with a gift for lock picking. Various elemental effects can be added to your weaponry, including adding a powerful flame to a sword or adding some ice to your bow and arrow. As with other RPGs, if you attack an enemy that is weak to your chosen element, you will deal out more damage and that allows you to win much faster if you wind up with a touch of luck when it comes to the enemies that you'll come into contact with. This is another downside to the game using random generation because you can't do a lot in the way of planning and instead have to have a jack of all trades-esque layout of cards at the ready.

With seven distinct character classes, Rogue Empire offers a lot of diversity in how it lets players approach its challenges. It offers up a large map with each dungeon and a variety of side quests. Death is also something that is to be feared - but not something you should allow to impede your enjoyment as death unlocks new perks for your next run. Rogue Empire is available now via Steam for $14.99 and looks like a great pickup for anyone who enjoys a touch of card battling alongside an overhead RPG. It's getting regular post-release updates to fine-tune the experience as well – showing that the devs are dedicated to creating the best experience possible for players.