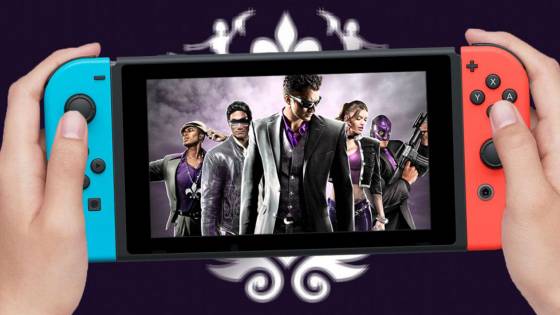 The Nintendo Switch has been getting a lot of ports from various developers, including ports of Wii U games by Nintendo itself. But it's the ports of indie and 3rd party gamers that continues to get gamers attention. Such as later this year when The World Ends With You Final Remix arrives from Square Enix, a game that originally came out in 2007 for the Nintendo DS. But now, a more insane port appears to be coming to Nintendo's popular console. Saints Row The Third.

If you don't know, Saints Row was a franchise created by Volition under the THQ publishing brand. The game originally was meant to be a Grand Theft Auto clone, as that had not been done at the time. But the sole exception that instead of being a lone person, you were part of a gang, the Third Street Saints. The first game was enough of a hit that it got a sequel, and that one led to Saints Row The Third. But it was with this game that everything truly changed.

For instead of trying to be a simple GTA clone, Saints Row The Third threw everything serious out the window (more or less) and went for an over-the-top story that was so crazy and irrelevant, that it captures the attention of just about everyone who laid their eyes on it. It didn't hurt that the game had legendary voice talent in the form of Hulk Hogan, Burt Reynolds, and more.

What really put the game on people's radars though was the original trailer that the game released in 2011 at E3. It showed a hyper-realistic version of the Saints in their new home in Steeleport and featured them getting into fights against their enemies. While the game itself wasn't that graphically powered, it was still very stunning. The tight gameplay and insane story mixed together to create an experience that was appreciated by all so much that it got nominated for numerous awards, including Game of the Year. Which is something no one would have expected when the series first came out.

The reason though that this is weird is many-fold. First and foremost, this wasn't the most recent game in the series. There was a Saints Row 4, and it did well enough. So why wasn't that put on the Switch? No one is really sure. That being said, it's universally agreed that Saints Row The Third is the best in the franchise, so maybe Deep Silver (who is now the owner of the franchise after the closing of THQ, and also runs Volition) felt that to go onto the Switch with their best title from the franchise was the better move.

Another curious thing is that though this was announced at Gamescom, it's unclear when it's coming out exactly. Deep Silver said it would be in "2019", but when is unknown. And given that this is a port of a 7-year-old game, you have to wonder how long it should take. Still, this is yet another interesting port coming to the Switch, and it'll be fun to see who gets it when it arrives.