Sarah Whitemane Has Come To Heroes of the Storm 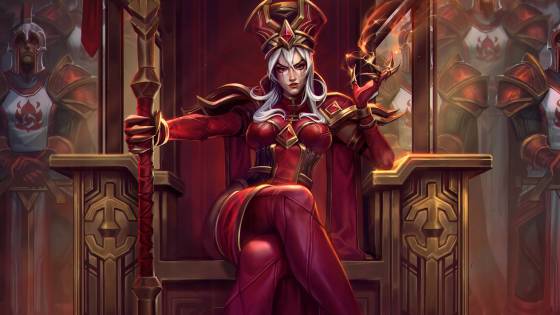 Blizzard is home to many special IPs in the gaming world, and they decided years ago to bring these great franchises together to create Heroes Of The Storm, a MOBA title where you can play as special characters from franchises like World of Warcraft, StarCraft, Overwatch, Diablo, and a few others, and one of the best things about the game is that Blizzard is constantly updating it with more content and more characters for players to try. And a new patch to the game has made it so that Sarah Whitemane is now playable.

If you're not familiar with the name, Sarah Whiteman comes from the World of Warcraft universe. She is a High Inquisitor of the Scarlet Crusade and is a Level 40 boss in the game. Or she was until she was canonically killed by players However, she was later reborn as an undead general in the Legion expansion of World of Warcraft. Now, she's back in full alive form, and she's ready to deal damage to those who get in her way.

As a character type, she is a Support-tier character, however, due to some of her healing abilities, she can support those who play a more intense or aggressive playstyle.

Sarah's main trait is called Zeal, and it's quite an interesting ability. You see, anytime she heals an ally, for the next eight seconds if she does damage to any foe, that damage is not only dealt to foes, but also translated to those allies as healing. So Sarah can do damage and heal allies at the same time.

Her Q move is called Desperate Plea, where she'll heal allies, but at a cost. For this move gives her "Desperation", which makes the cost of mana abilities go up, and it'll stack for up to 3 times. In contrast, she has a move for enemies called Inquisition, where she'll slow their movements and deal damage to them over time. Furthermore, she has "Searing Slash", where she'll strike enemies within in a line, and if she hits them, she'll get a second attack after a small pause.

As for her Heroic Abilities, Sarah has Scarlet Aegis, which will heal them by 250 health points, as well as give them 40 armor for 4 seconds. Perfect for a last rush or a push against the enemy. For damage, she has Divine Reckoning, where all enemies within a certain area will receive 50 damage every .5 seconds they're in the damage zone.

So Sarah Whitemane is definitely a character you might consider using in your party, that being said, her abilities are a bit specific at times, like with Desperate Plea, and she doesn't have an ability to help her get out of range of enemies, so she might be a character you use further back so that she can continue to heal you while not taking too much damage herself. The patch that contains here is live right now, so be sure to check her out and see if she's the right fit for you.