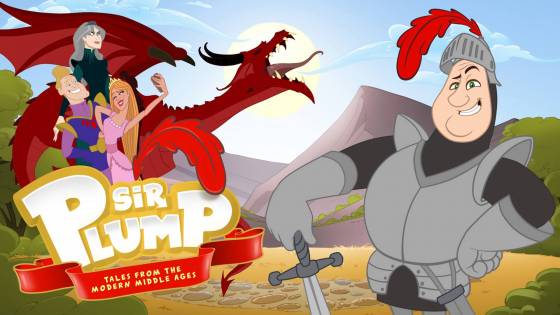 2D action-platformers are an age-old genre and remain a staple of gaming for many good reasons. The genre as a whole has been refined exceptionally well over the years and it's hard to do a bad job with one - although there are certainly some clunkers. The recent Bubsy: The Woolies Strike Back game is one such example of a game that greatly underperformed in all major metrics. Sir Plump is the debut effort from Gamelab and features the corpulent knight in a gorgeous adventure to save Princess Selfie. The game's art style is far more detailed than most action-platformers and looks more akin to what gamers saw animated in Dragon's Lair - only fully playable and in 2D. The hand-drawn art is richly-detailed, and the in-game world has a lot of small touches to it.

In an area with a fire-breathing dragon, you'll swing your sword realistically at it while evading fireballs - and the flames themselves reflect off of both the floor tiles and off the castle walls. It's a very convincing effect and something that adds a higher level of production value to the experience. Unlike a lot of platformers, there will be a healthy blend of humor thrown throughout the game. The world itself is very tongue in cheek and despite it being in a classic fantasy setting, it will have a lot of modern-day parts to it - as Princess Selfie's name implies.

The devs drew a lot of inspiration from history and did a heavy amount of research on the middle ages. The goal was to create a highly-detailed and picturesque version of that area and fill it up with all sorts of areas. There will be forests, mines, towns, and what looks like a series of mountains to play through alongside clear-cut paths from stage to stage. There appears to be a high amount of variety in the game's environments, and the main character himself is highly-expressive. The devs state that he is going to be a bit clumsy, which will probably work out well in cutscenes for comedy since having that kind of trait in a platforming game is unlikely to go well - and really, only Rogue Legacy has ever managed to pull off something like that.

Given the relative inexperience of the dev team, it's probably better to stick with something a bit simpler in concept and nail that concept perfectly. Sir Plump is set for a release on Linux and PC in late 2019 - with console releases planned later. The game is seeking a goal of $50,000 and is nearly 10% of the way towards its goal now. Those wanting the game can get it for $15 as an early bird special, while those who miss out on that can get it for $20. Pledging $35 gets you the full game a beta testing version and your name in the final game's credits. Beyond that, you can pledge more to get more copies of the game, PDFs of an art book, or even be put in the game as a gravestone, at the $100 mark.