Smith and Winston Enters Early Access for Linux and Windows 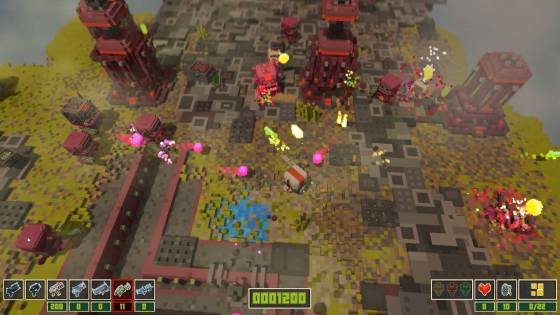 The rise of Geometry Wars 15 years ago on the original Xbox led to a slew of imitators across all platforms. However, the biggest thing it did was revive the long-dead twin-stick shooter genre. Small attempts had been made to revive it in the form of a new Robotron game in the late '90s, but nothing stuff until Bizarre Creations' fun little side game brought the shooting sub-genre back into the limelight again. Later full-fledged entries saw it gain even more popularity, and since then, it's had a bit of a downward turn once again. Enter Smith and Winston - beyond its gun brand-inspired name, you have a game that blends retro with modern in a unique way.

Voxel-based games have been on the rise for a decade, but haven't really hit the mainstream beyond the PS4's launch hit Resogun half a decade ago. Shooters haven't done much with the art style, but Smith and Winston is setting out to be the first vixel-based twin stick shooter. It's also one of the few shooters out there that rewards world exploration. Like any shooter, you obviously have a goal of killing everything in sight - but being able to explore the world enables you to find secret items and goodies.  The stages are all hand-made - so there's no procedural generation going on, and as a result, you have the same core stages to learn and master instead of just having to get acclimated to different stage hazard types blended together like a level creation smoothie.

The in-game worlds are fully-destructible - resulting in some gorgeous explosions as you'll see mountains and trees just explode block by block. It's rewarding and encourages players to try different weapon types on different types of terrain and seeing what happens. You may wind up being able to blow up a tree easily, for example, but need to use more ammo on  a large rock formation. Smoke is also visible when you use something like a grenade to blow something up and that adds a nice touch of realism to the realistic, but exaggerated worlds.

In a slightly unusual move for a shooter, there is a puzzle element to the game too - putting some of the secret parts to a stage behind them. This allows you to still enjoy the core game, but also use your brain to find new areas. The secret areas will allow you to get a nice boost in power overall, and some will require some dexterity in order to hit the right object at the right angle with the correct weapon. Unlike most shooters, this has no life bars and you have limited lives - adding an extra layer of importance to defense that isn't using seen. It's so easy to go into a game like this with guns blazing, but doing so here will get you killed. Fortunately, playing carefully is made fairly easy by giving you plenty of tools to survive - but to truly excel, you will need to use skills.

Finally, there's a lot of movement here for a shooter - with jump packs allowing you to jump higher and find new areas while boost packs allow you to speed around the world. Smith and Winston just launched on Steam early access for $9.99, and its final release date is set for March 22. Anyone who loves a good, exciting twin stick shooter should find a lot to enjoy here.