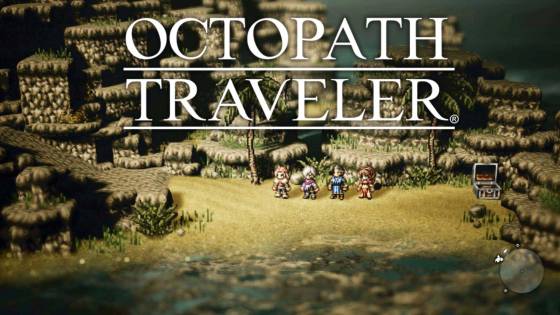 Octopath Traveler has been a big deal for the developers over at Square Enix. As we reported earlier this week, the hit Switch JRPG has climbed to a whopping one million units sold in total so far. Keep in mind, it hasn't even been out a full month yet, so these numbers are very impressive. Square Enix has definitely taken notice of its popularity and success, and are now turning towards the future to figure out what more they can do with this genre of gaming. Takashi Mochizuki, a Wall Street Journal reporter, recently attended an earnings conference held by Square Enix just the other day. He provided all the details of what was said on his Twitter account, and luckily, the developer had a lot to say.

Due to the high sales numbers mentioned above, Octopath Traveler blew Square Enix's sales expectations out of the water, especially for the United States and Europe. The game has been selling like hot cakes, and it was noted that there's been a higher than average ratio of downloadable purchases vs packaged purchases. This is likely in part thanks to Octopath Traveler being a Switch exclusive, a console that has seen high amounts of digital downloads. Considering its ability to play games on the go, having a library of digital titles makes things more convenient for many who may not want to carry around all their cartridges. Square Enix has a few theories on why it's been doing so well too. They believe that not only has there been a surge of appreciation for JRPGs in recent years, but Octopath also appeals to older Square Enix fans due to its gameplay and graphical style. This includes the game's pretty HD-2D environments and attractive character designs, as the company puts it.

They went on to reveal that they intend to make more games like Octopath Traveler going forward, which is music to the ears of many an RPG fan out there. When asked if they think the Switch is a good platform for middle-range games (i.e. games of average popularity in between Triple As and Indies), Square Enix said yes. They noted that despite Octopath's Switch exclusivity, they'll decide which platforms are most appropriate for future games made in this genre. That's as vague as they could leave it, but it does leave an exciting amount of possibility for things to come. Recently, Bravely Default's official Twitter account has undergone some mysterious changes. Their username changed, their profile banner is a new image, and a tweet was put out telling fans to look forward to new games from the Business Division 11 at Square Enix (the guys who made Octopath Traveler). Coincidence, I think not. Looks as if Bravely Default may be the next step!

As for Octopath Traveler, the game is out and deserves your love if you haven't checked into it yet. If you're on the fence, the Switch eShop has a three-hour demo that can carry your progress over into the full game. As mentioned, the game is entirely exclusive to Nintendo Switch and is available both digitally and physically. If you want the full set of tweets about Square Enix's reports, make sure to go over to Mochizuki's Twitter account. The future is looking bright for Square Enix, and very filled with more JRPGs. Another of their famous titles, The World Ends With You, is set to come out on Switch October 12th. Don't miss out on that either if you're hankering for more solid RPGs to play.